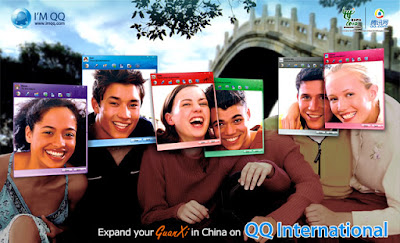 After 4 betas released throughout 2009 and 2010, QQ International (QQi) 1.0 is a multi-language instant messenger client that's based on the platform of China's hugely popular chat program QQ. Available in English, Japanese and French, QQi offers a bridge to any non-Chinese user to connect with the existing 600 million active Chinese language accounts. Hot new features include:

File TransferSend /receive folders directly; save the hassle for zipping and unzipping folders!

ScreenshotNow you can paint with a free-style brush, and select thickness for the Rectangle and Ellipse Tools.

City WeekendAlways stay connected to the best events and the hotest venues in the CityWeekend app.

China DailyThe best of the news only a click away with the ChinaDaily app.

This new Windows version is available now at http://intl.imqq.com/download.html.

Unfortunately, the Mac OS X version is still 1.0 beta 1 and available at http://im.qq.com/qq/mac/.

Neither the Macintosh nor Linux versions seem to be a priority for Tencent. The iPod Touch/iPad/iPhone version can be downloaded at iTunes.com