We say this prayer upon entering the temple.


+I will come into Your house in the greatness of Your mercy: and in fear I will worship toward Your holy temple.
+Lead me, O Lord, in Your righteousness because of my enemies; make Your way straight before me, that with a clear mind I may glorify You forever, One Divine Power worshiped in three persons:
+Father, Son, and Holy Spirit. Amen. 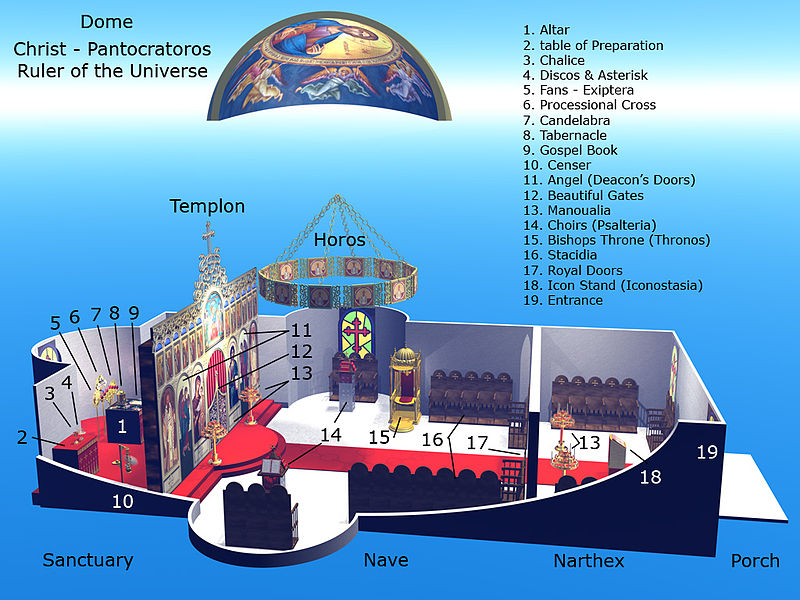 NARTHEX/REFECTORY
The purpose of the narthex was to allow those not eligible for admittance into the general congregation (particularly catechumens and penitents) to hear and partake in the service. The narthex would often include a baptismal font so that infants or adults could be baptized there before entering the nave, and to remind other believers of their baptisms as they gathered to worship. The narthex is thus traditionally a place of penitence, and in Eastern Christianity some penitential services, such as the Little Hours during Holy Week are celebrated there, rather than in the main body of the church. In the Russian Orthodox Church funerals are traditionally held in the narthex.

Later reforms removed the requirement to exclude people from services who were not full members of the congregation, which in some traditions obviated the narthex. Church architects continued, however, to build a room before the entrance of the nave. This room could be called an inside vestibule (if it is architecturally part of the nave structure) or a porch (if it is a distinct, external structure). Some traditions still call this area the narthex as it represents the point of entry into the church, even if everyone is admitted to the nave itself.

In traditional Byzantine architecture, the narthex is divided into two distinct structures: an esonarthex (inner narthex), between the outer porch and the body of the church proper separated from the nave and aisles by a wall, arcade, colonnade, or screen; and an exonarthex (outer narthex) outside the main façade of the church, usually part of a colonnaded or arcaded atrium or quadriporticus (quadrangle). The exonarthex may be either open on the western end or enclosed, with a door leading to the outside. The esonarthex and exonarthex have distinct liturgical functions. For instance, the procession at the Paschal Vigil will end up at the exonarthex for the reading of the Resurrection Gospel, while certain penitential services are traditionally chanted in the esonarthex.

In some Eastern Orthodox temples (churches), the narthex will be referred to as the trapeza (refectory), because in ancient times, tables would be set up there after the Divine Liturgy for the faithful to eat a common meal, similar to the agape feast of the early church. To this day, this is where the faithful will bring their baskets at Pascha (Easter) for the priest to bless the Paschal foods which they will then take back to their homes for the festive break-fast. Traditionally, the narthex is where candles and prosphora will be sold for offering during Divine Services.

The doorway leading from the narthex to the nave is sometimes referred to as the "Royal Doors", because in major cathedrals there were several sets of doors leading into the nave, the central one being reserved only for the use of the Emperor.

On feast days there will be a procession to the narthex, followed by intercessory prayers, called the Litiya.

NAVE
The nave is the main body of the church where the people stand during the services. In most traditional Eastern Orthodox churches there are no seats or pews as in the West, but rather stacidia (A high-armed chair with armrests high enough to be used for support while standing); these are usually found along the walls. Traditionally there is no sitting during services with the only exceptions being during the reading of the Psalms, and the priest's sermon. The people stand before God. However, many exceptions to this can be found in western countries, especially the USA, where familiarity with Catholic and Protestant churches has led to similarities in church furnishings. It is not uncommon to encounter both pews and kneelers.

The walls are normally covered from floor to ceiling with icons or wall paintings of saints, their lives, and stories from the Bible. Because the church building is a direct extension of its Jewish roots where men and women stand separately, the Orthodox Church continues this practice, with men standing on the right and women on the left. With this arrangement it is emphasized that we are all equal before God (equal distance from the altar), and that the man is not superior to the woman. In many modern churches this traditional practice has been altered and families stand together.

Above the nave in the dome of the church is the icon of Christ the Almighty (Παντοκρατωρ/Pantocrator, "Ruler of All"). Directly hanging below the dome is usually a kind of circular chandelier with depictions of the saints and apostles, called the horos.

ICONOSTASIS/TEMPLON
The iconostasis, also called the templon, it is a screen or wall between the nave and the sanctuary, which is covered with icons. There will normally be three doors, one in the middle and one on either side. The central one is traditionally called the Beautiful Gate and is only used by the clergy. There are times when this gate is closed during the service and a curtain is drawn. The doors on either side are called the Deacons' Doors or Angel Doors as they often have depicted on them the Archangels Michael and Gabriel. These doors are used by deacons and servers to enter the sanctuary. Typically, to the right of the Beautiful Gate (as viewed from the nave) is the icon of Christ, then the icon of St John the Baptist; to the left the icon of the Theotokos, always shown holding Christ; and then the icon of the saint to whom the church is dedicated (i.e., the patron). There are often other icons on the iconostasis but these vary from church to church. The curtain is also drawn and opened at various points in the service.

A direct comparison for the function of the main iconostasis can be made to the layout of the great Temple in Jerusalem. That Temple was designed with three parts. The holiest and innermost portion was that where the Ark of the Covenant was kept. This portion, the Holy of Holies, was separated from the second larger part of the building's interior by a curtain, the "veil of the temple". Only priests were allowed to enter the Holy of Holies. The third part was the entrance court. This architectural tradition for the two main parts can be seen carried forward in Christian churches and is still most demonstratively present in Eastern Orthodox churches where the iconostasis divides the altar, the Holy of Holies containing the consecrated Eucharist – the manifestation of the New Covenant, from the larger portion of the church accessible to the faithful. In the Eastern Orthodox tradition only men can enter the altar portion behind the iconostasis.

A number of guidelines or rubrics govern which icons are on which parts of the iconostasis, although there is some room for variation. In its fullest Slavic development it comprised five tiers of icons:

It is also not uncommon to find an icon of the Mystical Supper, which depicts the Last Supper, and by extension the Communion of Saints in the Kingdom of God, somewhere above the Beautiful Gates.

The Sovereign tier is always present, but all the others may be omitted. Preference is given to the Deisis or the Feasts tiers if only some of them can be included. Only the largest and most elaborate iconostases include all five.

Above and behind the iconostasis is the Platytera ton Ouranon (more spacious than the heavens), the icon of Virgin Mary with Christ blessing all. Oil lamps burn before all the icons.

SANCTUARY/HOLY OF HOLIES
The area behind the iconostasis reached through the Beautiful Gates or Angel Doors is the sanctuary or altar. Within this area is the altar table, which is more often called the holy table or throne; the apse containing the high place at the center back with a throne for the bishop and the synthronos, or seats for the priests, on either side; the Chapel of Prosthesis on the north side where the offerings are prepared in the Proskomedia before being brought to the altar table and the holy vessels are stored; and the Diaconicon on the south side where the vestments are stored.

Orthodox Altars are usually square. Traditionally they have a heavy brocade outer covering that reaches all the way to the floor. Occasionally they have canopies over them. All Eastern Orthodox altars have a saint's relics embedded inside them, usually that of a martyr, placed at the time they are consecrated. Atop the altar table at the center toward the back is an ornate container usually called the tabernacle where the reserved Eucharistic elements are stored for communion of the sick. It is often shaped like a model of a church building. In front of this is placed the Gospel book, which usually has a decorated metal cover. Under the gospel is a folded piece of cloth called the eiliton. Folded within the eiliton is the antimension, which is a silken cloth imprinted with a depiction of the burial of Christ and with relics sewn into it. Both these cloths are unfolded before the offerings are placed on the altar table. Behind the altar is a seven-branched candlestick, which recalls the seven-branched candlestick of the Old Testament Tabernacle and Temple in Jerusalem. Behind this is a golden processional cross. On either side of the cross are liturgical fans (ripida) which represent the six-winged seraphim. Against the wall behind the altar is a large cross. Hanging from the cross is usually a flat iconographic depiction of Christ (corpus) which can be removed during the 50 days following Pascha (Easter).

None may enter the altar without a blessing from the priest or bishop.