Saint Nicholas of Japan, Apostle to the Japanese 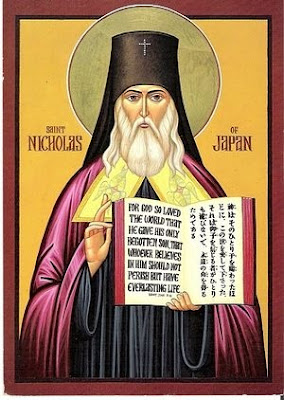 Saint Nicholas, Enlightener of Japan, was born Ivan Dimitrievich Kasatkin on August 1, 1836 in the village of Berezovsk, Belsk district, Smolensk diocese, where his father served as Deacon. At the age of five he lost his mother. He completed the Belsk religious school, and afterwards the Smolensk Theological Seminary. In 1857 Ivan Kasatkin entered the Saint Peterburg Theological Academy. On June 24, 1860, in the academy temple of the Twelve Apostles, Bishop Nectarius tonsured him with the name Nicholas.

On June 29, the Feast of the foremost Apostles Peter and Paul, the monk Nicholas was ordained deacon. The next day, on the altar feast of the academy church, he was ordained to the holy priesthood. Later, at his request, Father Nicholas was assigned to Japan as head of the consular church in the city of Hakodate.

At first, the preaching of the Gospel in Japan seemed completely impossible. In Father Nicholas’s own words: “the Japanese of the time looked upon foreigners as beasts, and on Christianity as a villainous sect, to which only villains and sorcerers could belong.” He spent eight years in studying the country, the language, manners and customs of the people among whom he would preach.

In 1868, the flock of Father Nicholas numbered about twenty Japanese. At the end of 1869 Hieromonk Nicholas reported in person to the Synod in Peterburg about his work. A decision was made, on January 14, 1870, to form a special Russian Spiritual Mission for preaching the Word of God among the pagan Japanese. Father Nicholas was elevated to the rank of archimandrite and appointed as head of this Mission.

Returning to Japan after two years in Russia, he transferred some of the responsibility for the Hakodate flock to Hieromonk Anatolius, and began his missionary work in Tokyo. In 1871 there was a persecution of Christians in Hakodate. Many were arrested (among them, the first Japanese Orthodox priest Paul Sawabe). Only in 1873 did the persecution abate somewhat, and the free preaching of Christianity became possible.

In this year Archimandrite Nicholas began the construction of a stone building in Tokyo which housed a church, a school for fifty men, and later a religious school, which became a seminary in 1878.

In 1874, Bishop Paul of Kamchatka arrived in Tokyo to ordain as priests several Japanese candidates recommended by Archimandrite Nicholas. At the Tokyo Mission, there were four schools: for catechists, for women, for church servers, and a seminary. At Hakodate there were two separate schools for boys and girls.

In the second half of 1877, the Mission began regular publication of the journal “Church Herald.” By the year 1878 there already 4115 Christians in Japan, and there were a number of Christian communities. Church services and classes in Japanese, the publication of religious and moral books permitted the Mission to attain such results in a short time. Archimandrite Nicholas petitioned the Holy Synod in December of 1878 to provide a bishop for Japan.

Archimandrite Nicholas was consecrated bishop on March 30, 1880 in the Trinity Cathedral of Alexander Nevsky Lavra. Returning to Japan, he resumed his apostolic work with increased fervor. He completed construction on the Cathedral of the Resurrection of Christ in Tokyo, he translated the service books, and compiled a special Orthodox theological dictionary in the Japanese language.

Great hardship befell the saint and his flock at the time of the Ruso-Japanese War. For his ascetic labor during these difficult years, he was elevated to the rank of Archbishop. 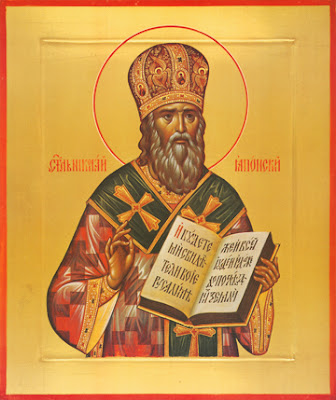 In 1911, half a century had passed since the young hieromonk Nicholas had first set foot on Japanese soil. At that time there were 33,017 Christians in 266 communities of the Japanese Orthodox Church, including 1 Archbishop, 1 bishop, 35 priests, 6 deacons, 14 singing instructors, and 116 catechists.

On February 3, 1912, Archbishop Nicholas departed peacefully to the Lord at the age of seventy-six. The Holy Synod of the Russian Orthodox Church glorified him on April 10, 1970, since the saint had long been honored in Japan as a righteous man, and a prayerful intercessor before the Lord. He is commemorated on February 16th in the New Calendar and February 3rd on the old calendar. For his successful apostolic and evangelistic efforts, he was named Equal-to-the-Apostles and the Apostle to Japan.

Troparion — Tone 4
O holy saint Nicholas
The enlightener of Japan,
You share a dignity and the throne of the Apostles;
You are a wise and faithful servant of Christ,
A temple chosen by the Divine Spirit,
A vessel overflowing with the love of Christ.
O hierarch equal to the Apostles,
Pray to the Life-Creating Trinity
For all your flock and for the whole world.