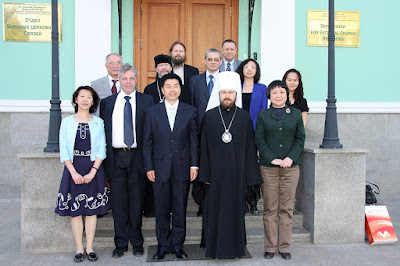 The first consultations of the Russian-Chinese group for contacts and cooperation in religious sphere were held on June 8, 2010, at the Moscow Patriarchate Department for External Church Relations.

Background: in November 2009, a delegation of Russia’s Presidential Council for Cooperation with Religious Associations, which included representatives of the Department for External Church Relations, visited China at the invitation of China’s State Administration for Religious Affairs, to discuss the development of Russian-Chinese cooperation in the religious sphere in accordance with the 2009-2012 Action Plan for Implementation of the Treaty of Good-neighbourly Relations, Friendship and Cooperation between the two countries.

This Plan adopted by Russian President Medvedev and PRC Chairman Hu Jingtao provided for the development of dialogue and cooperation between the major religious confessions in Russia and China and the establishment of contacts between the Presidential Council for Cooperation with Religion Associations and the State Administration for Religious Affairs, as well as between the Interreligious Council in Russia and the Chinese Association for Cultural and Religious Relations.

As a result of the 2009 visit, two memoranda were signed between the two bodies, one on general issues concerning the development of Russian-Chinese contacts and cooperation in the religious sphere, the other concerning a procedure for Chinese Orthodox students’ studies in theological schools of the Russian Orthodox Church.

On the basis of the memorandum of understanding, a Russian-Chinese group was set up for promoting contacts and cooperation in the religious sphere. Metropolitan Hilarion of Volokolamsk, head of the Moscow Patriarchate’s department for external church relations, was appointed to lead the Russian members of the joint group.

The first consultations were co-chaired by Metropolitan Hilarion and Mr. Zhang Labin, deputy director of the State Administration for Religious Affairs. The Russian side was represented by high state and church officials as well as high-ranking representatives of the Buddhist and Muslim communities in Russia. The Chinese party to the talks consisted of governmental officials from the State Administration for Religious Affairs.