About the Orthodox Scouter 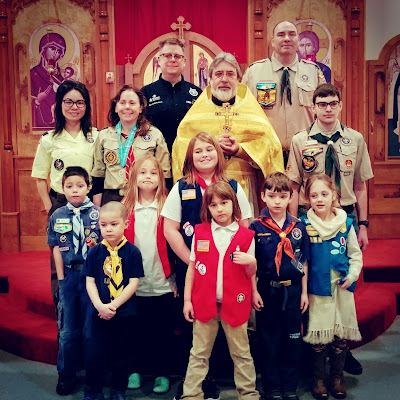 Welcome to my blog! I started this part of the blogosphere on the annual celebration of the feast day of Great-Martyr Procopius of Caesarea in Palestine, 21 July, 2003. However, Saint Basil of Kineshma (31 July) is the patron saint of this blog as he was both an Orthodox Christian cleric, but also a Scout Leader (Scouter).

I am an Eastern Orthodox Christian Scouter (Volunteer & Professional Scout Leader) with 3 children. I am an American by birth and Irish, Polish, Slovak, Ukrainian, Scandinavian, German, British, Syrian, and Jewish by genetics. My first born child is part Native American Indian and my second and third born children are both half Han Chinese. If you'd like to pray for my family, which I would greatly appreciate, our patron saints are: 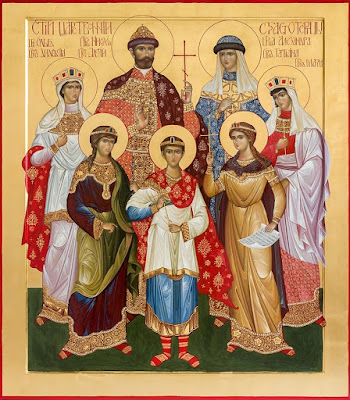 My godfather is Serbian, so our family has adopted a Slava of the Royal Martyrs of Russia (17 July), which is fitting since we all descend from royalty.
Learning, teaching, reading, writing,  mentoring others, and conservation are among my many positive passions beyond Orthodoxy and Scouting. Besides salvation for my family and myself, my biggest goal is leaving the world a better place than when I entered it. Part of that goal is achieved by participation in Scouting, where I am involved in many positions on all levels from the local unit to the district, council, territory, national, and international levels. Some of the many positions that I serve in Scouting currently include:
I have a Masters Degree in Divinity (Orthodox Church Theology) after previously going to college for Business Administration, Business Science, and Computer Science. I am currently working on my Doctorate in Commissioner Science. I am a retired deacon of a Russian Orthodox Christian Church. I have been a catechist, council member, and teacher in the various Eastern Orthodox Christian Churches that I have been an active member of. I was first catechized in a Ukrainian Orthodox Christian Church almost 25 years ago and have regularly attended Russian, Serbian, Rusyn, Greek, and Antiochian Orthodox Christian Churches since then. I like to attend the Divine Services of whichever Eastern Orthodox Christian Church is closest to where I live, as I am vehemently against the heresy of Phyletism, especially ethno-phyletism and racism. I am a Lean Six Sigma Black Belt and was until recently blessed to work at the national offices of the BSA as their Lean Six Sigma Master Black Belt. I am also a published author of the high fantasy fiction series, "The Vhaidra Saga".
Originally this blog was called "Insane Ramblings and Orthodox Ecclesiology". At the time it was a fitting name, as I had more insane ramblings than Eastern Orthodox Christian Ecclesiology (which I define as Orthodox Christian Theology, Praxis, Dogma, & Patristics). I have had multiple short-term blogs over the years, so the blog you see now also includes some of the content from those blogs including "iNicholas", "Yellow Dog iBook", "Ubuntu PowerMac", "This Too Was Dugg By...", and my old LiveJournal called, "Nicholas is Not Without".
Eventually I blogged mostly about Orthodox Christian Ecclesiology, and as such, the blog was renamed, "Orthodox Ecclesiology and The World". The World was included in the title because I continued to occasionally blog about worldly things like my family, Scouting, exercise, dieting, health, politics, work, music, soccer (Association Football) and American Football (especially the NFL's Green Bay Packers), etc.. Years later, the name later changed yet again to "The Orthodox Scouter", as my content continued to evolve, and now has more content about Cub Scouts BSA, Boy Scouts BSA, Sea Scouts BSA, STEM Scouts BSA, Venturing BSA, Exploring BSA, Scouting BSA, and even Girl Scouts USA, but timeless Eastern and Ancient Western Orthodox Ecclesiology continues and will always remain the largest and most fundamental part of this blog. 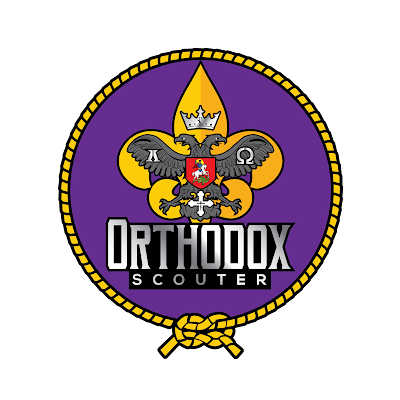 The URL to this blog has also changed multiple times over the years. I likewise have changed the design often as well. Most recently, before going to a solid dark navy (#1a1b29 the color of the super sharp Sea Scouts BSA Uniforms) background for a while, there was a gold leaf background that I had used for many years. Prior to that, the blog had a light blue Orthodox Christian Clerical vestments designs that was a background that I had originally designed for the old Saint Basil of Kineshma Russian Orthodox Church website that I was the webmaster for.  As of Summer 2019 there is a Venturing Forest Green background and theme. "KaruZone" from Fiverr made the new site logo in 2019. If you like it, please go visit him and let him know. He'll make logos for your site, with unlimited revisions for only about $25! Currently the background is one of my many bookshelves of Orthodox Christian Theological and Liturgical books. As you can see, I am a sucker for beautiful hardcover books, especially when the text inside is readable and worth it s weight in gold!

I love comments and hope that you will comment on stories that you enjoy or loathe. Feedback is a gift! Again, welcome to my little part of the blogosphere. I hope you enjoy your stay!
Opinions expressed on this blog are my own and do not necessarily represent nor have been approved/authorized by the Boy Scouts of America, the Eastern Orthodox Committee on Scouting, or anyone else except for myself.