The 5 Points of Calvinism: The Reformed Doctrines of Doom & Gloom (TULIP) 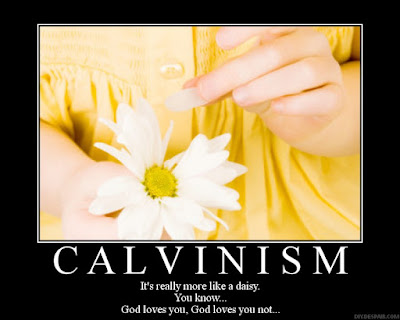 Continued from http://orthodoxscouter.blogspot.com/2011/10/solemn-caution-against-ten-horns-of.html
The First Point [U]

The second side (the negative or doom and gloom side) of the first point is that if God has not chosen you for salvation, – meaning He has chosen you for damnation – He did so unconditionally. You were chosen, decreed, and created for damnation. You cannot believe and are therefore damned for your unbelief because this is according to god’s sovereign will and for His glory and good pleasure.

The first side (the positive spin) of the second point of Calvinism is that if you, before the foundation of the earth, are one of those unconditionally elected for salvation you will one day (in this life) inevitably be born again before the final judgment. When you are born again you will be given a new nature. As your old nature was an unbelieving nature so your new nature will be a believing nature. Here is how it unfolds. As a new born child of God you will (as a result of your new birth) believe in Jesus Christ. Because (and when) you believe in Jesus Christ you will be declared righteous and be guaranteed a place of the other chosen few among the resurrection of the just-and at that time glorified for all eternity.

The second side (the negative or doom and gloom side) of the second point is that if you are not one of the unconditionally elect, you will not and cannot born again. Here is how it unfolds. Because you are not elect, you will never be born again but will forever be stuck with your predestined unbelieving nature – you will not and cannot believe in Jesus Christ. Because you cannot believe in Jesus Christ in your unregenerate condition, you will not be justified. If you are not justified you will eventually be raised with the other unconditionally predestined unjust, and finally be sentenced to everlasting shame and torment. This to is according to god’s sovereign will and good pleasure.

The first side (the positive spin) of the third point of Calvinism is that if you were unconditionally chosen and created for salvation, Christ died for your sins so that the eternal decree for salvation would have an historical provision for salvation.

[But it is okay in one way, because you can go to Church and hear Calvinists preach and say that the Gospel is a “well meant offer” to you, even though it will never change your un-elect status, but it will sound nice to you. In fact, it even deceives some of the reprobate into falsely thinking they are elect !]

The Fourth Point [I]

The first side (the positive spin) of the fourth doctrine is that if you were chosen and created for salvation, God will irresistibly draw or efficaciously call you (applying saving grace to your life and circumstance) to Himself, first giving you a new life, which in turn brings with it a new nature, which is a believing nature, resulting in your certain and immediate justification and eventual and everlasting glorification.

The second side (the negative or doom and gloom side) of the fourth doctrine is that if you were not chosen and created for salvation-meaning that you were chosen and created for damnation-you will not be irresistibly drawn, efficaciously called, and no saving grace will be extended to you, which means you will not and cannot be born again, which in turn means you cannot have faith in Christ and thereby be justified in this life or ultimately glorified in the next life. Instead you will suffer the torments of the everlasting lake of fire in accordance with the sovereign will of god because this is according to His good pleasure.

The first side (the positive spin) of the fifth point of Calvinism is that if you were chosen and created for salvation, the new nature you receive when you are born again, and the saving faith that comes with that new nature, and the justification that immediately follows faith insures that you will live (however imperfectly) a sanctified, holy, or righteous life in faith (practically speaking) for the most part, from the time of your regeneration until the time of your glorification. This perseverance in sanctification, holiness, or righteousness in faith, while not perfect is inevitable for the truly born again and will be to the end of this life for the elect. It is not as though the elect should not fail to persevere (for the most part) but they cannot do so. If therefore a person appeared to be a saint earlier in life, but failed to persevere in faith and righteousness until the end of life, it proves he was never a saint or never born again, never had faith in Christ, and never had a holy and righteous life in faith to persevere in.

The second side (the negative or doom and gloom side) of the third point is that if you are not elect and created for salvation-meaning you are elect and chosen for damnation-you cannot be born again, have faith in Christ, live a holy or righteous life in faith for even one day, much less to the end of your life. Because God is sovereign and can do as He pleases with His creatures, God is free to mislead a person into thinking they are one of the elect, help them live much like the elect, but at the judgment reveal that they were convinced by God that they were one of the elect even though they were not. No matter how convinced someone is in thinking he is one of the elect, assurance of salvation and eternal life is impossible to secure. How could anyone know for certain that they will persevere to the end proving they were elect without actually having persevered to the end. 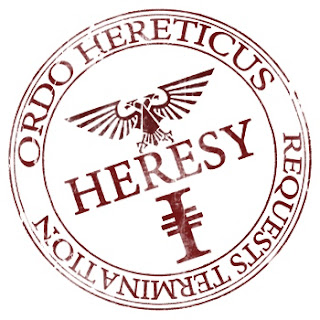 Unfortunately most new converts to Calvinism are not aware of the flip side to the five points of Calvinism early on. Those who introduce Calvinism to the non-Calvinist believe that the new believer is not ready for the meatier stuff of Reformed theology. That, they say, should come only later when they can handle it. They reason that the positive spin of each point is like simple arithmetic. The negative side is more like algebra or some other more complicated, difficult and higher form of math.

The truth is this; the negative side is not more difficult to understand for the new convert to Calvinism, it is more difficult to accept. The positive spin seems more palatable whereas the negative side is difficult to swallow and some even choke on it. Full disclosure, early on and sometimes even later on, is a major hindrance to those committed to winning the non-Calvinist over to Calvinism. Admittedly, sometimes proponents of Calvinism do not lay it all out on the table because they themselves have not turned the coin over to see what is on the other side. Sometimes they ignore it. Sometimes they deny it. They are on the Reformed road and are trying to get others to join them. However, they have not gone very far and sometimes do not choose to go but a few blocks down the Reformed road.

Some would like to believe that each of the five points of Calvinism are only five points of grace. It is too much (for them) to think that these five points also represent a very hard and harsh message of doom and gloom.