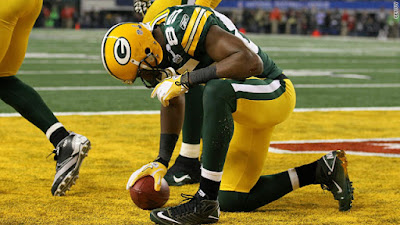 If anyone knows the history of the Green Bay Packers, they will know that there has been a religious history with it. Recently, Coach McCarthy showed it continues today.

When asked in a recent Tuesdays with McCarthy, "What’s something you always tell your team before they go out on the field?"

He responded, "...The last thing I say to the team is a prayer that highlights scripture from the Bible that’s representative of our theme for the week. After the Bible verse, we say the Lord’s Prayer..."

In Super Bowl I and II, it was quarterback Bart Starr and coach Vince Lombardi who provided spiritual leadership for the team. “God first, family second, and then football,” was Lombardi’s self-proclaimed priority list. Named MVP in both Super Bowl I and II, Bart Starr acknowledged that, “Regardless of the success that I have experienced, if my life does not exhibit God’s love, it becomes less meaningful.”

Each day on his way to work for the Green Bay Packers, Lombardi would stop at St. Willebrord for daily mass and "offer a prayer in case of unexpected death: 'My God, if I am to die today, or suddenly at any time, I wish to receive this Communion as my viaticum...'". On the morning of the dedication of Lombardi Avenue, Lombardi remarked, to his 37 member entourage, he was pleased to have gotten them all up to attend morning mass.

Things began to change under Mike Sherman’s tenure as head coach. Sherman saw the value of having one permanent chaplain with whom players could build a trusting relationship, because he saw that their spiritual needs required more than Sunday Mass.

For years the team had offered Catholic Mass and a non-denominational chapel service at the same time—4 ½ hours before kickoff—in separate rooms. Coach McCarthy has changed that, with Mass still before the game but chapel the night before. McCarthy did this so he can attend both services every week. The coach wants to hear everything that is presented to his players, so he can incorporate all of these spiritual messages in directing the team. It is just another indicator of the Packers’ spiritual legacy and dedication to their players’ overall well-being.

Famous Green Bay Packer, Reggie White, was known for his Christian ministry as an ordained Evangelical minister, leading to his nickname, "The Minister of Defense."