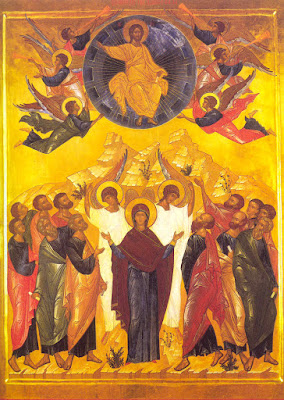 The week following Pascha is called Bright Week, by the Church. As Holy Week was a final time of anticipation and intense preparation for “the Feast of Feasts,” so Bright Week is a period of unique Resurrection joy, manifested outwardly by the faithful in diverse ways. For instance, during Bright Week there is no fasting at all from various types of food; all liturgical hymns, ideally, are to be sung rather than read; and the Church remains highly decorated, with the royal doors and the deacon’s doors of the iconostasis left open as they were during the Midnight Service. This latter practice visually emphasizes that the gates of God’s Kingdom have been open to man through the Cross, Tomb and Resurrection of Christ. Services celebrated during Bright Week are done so in a particularly glorious manner, identical to that which was experienced during the Midnight Service and Resurrection Vespers on Pascha Sunday. The traditional announcement, “Christ is Risen,” is sung repeatedly by the Church choir, and people greet one another with this same message of hope.While Bright Week is a time of profound and perhaps uncommon celebration, the Resurrection season is definitely not limited to one week. For forty days after Pascha, until Ascension (this year May 24), the faithful recall in songs and greetings the joyous news that ‘Christ has trampled down death by death, bestowing life upon those in the tombs.’ Clergy and altar servers continue to wear their brightest vestments, and everyone stands (rather than kneels) in prayer, both at home and in Church. The practice of standing in prayer during the Paschal Season serves to stress our belief that in Christ we are already resurrected beings, residents on earth yet citizens of Heaven. The faithful actually continue this practice until Pentecost (this year June 3), when after Liturgy for the first time since Holy Week we kneel in prayer during three special prayers that are read from the ambo by the clergy.

The five Sundays following Pascha (Easter) emphasize, through the appointed Scripture readings and hymns, (1.) post-resurrection appearances of Christ; (2.) the Church’s early life and missionary endeavors (epistle readings are taken from the Book of Acts); and (3.) aspects of baptism, through which we ourselves have died and risen with the Lord to a new life in God (Gospel readings are taken from the most “sacramental” of the Gospel accounts, that of John the Theologian or Evangelist). Fr. Thomas Hopko in his Orthodox Faith Handbook Series, Volume II, provides a summary of the meaning of the five Sundays of Pascha. The following contains quotes and paraphrases from that summary.

Thomas Sunday (April 22):
On the Sunday following Pascha, called in our liturgical books “the Second Sunday,” the stress is on the Apostle Thomas’ vision of Christ. The significance of the day comes to us in the words of the Gospel: “Then He said to Thomas, “Put your finger here, and see My hands; and put out your hand, and place it in My side; do not be faithless, but believing.” Thomas answer Him, “My Lord and My God!” Jesus said to him, “Have you believed because you have seen Me? Blessed are those who have not seen and yet believe.” (John 20:27-29)In this last statement Christ refers to all those who will come after the Apostles and become disciples through their words. This includes Christians of every century, including our own. We have not seen Christ with our physical eyes, nor touched His risen body with our physical hands, yet in the Holy Spirit we have seen and touched and tasted the Word of Life (1 John 1:1-4), and so we believe. In the early Church it was only on this day that those baptized at Pascha removed their (baptismal) robes and entered once again into the life of this world.

The Myrrhbearing Women (April 29):
The Third Sunday after Pascha is dedicated to the Myrrhbearing Women who cared for the body of the Savior at His death and who were the first witnesses of His Resurrection. The three troparia of Holy Friday, (having to do with the Noble Joseph of Arimethea anointing and burying the Body of Jesus; Christ’s descent into hell and its defeat; and the angel’s proclamation to the myrrhbearing women of Christ’s resurrection) are sung once again and form the theme of the day:

The Paralytic (May 6):
The Fourth Sunday is dedicated to Christ’s healing of the Paralytic (John 5). The man is healed by Christ while waiting to be put down into the pool of water. Through baptism in the church we too are healed and saved by Christ for eternal life. Thus, in the church, we are told, together with the paralytic, to “sin no more that nothing worse befall you” (John 5:14). Our Lord’s question to the man, “Do you want to be healed?” is directed to us as well, reminding us that the gift of life and illumination through the Resurrection brings with it responsibilities. It must be nurtured and shared with others.

The Feast of Mid-Pentecost:
In the middle of the Fourth Week, there is a day which is called by the Church, the Feast of Mid-Pentecost (this year May 9). On this day we recall that Christ, “in the middle of the feast” teaches men of His saving mission and offers to all “the waters of immortality” (John 7:14). Again we are reminded of the Master’s presence and His saving promise: “If anyone is thirsty let him come to Me and drink” (John 7:37).

The Samaritan Woman (May 13):
The Fifth Sunday after Pascha deals with the Woman of Samaria with whom Christ spoke at Jacob’s Well (John 4). Again the theme is the “living water” and the recognition of Jesus as God’s Messiah (John 4: 10-11; 25-26). We are reminded of our new life in Him, of our own drinking of the “living water,” of our own true worship of God in the Christian Messianic Age “in Spirit and in Truth” (John 4: 23-24). We see as well that salvation is offered to all: Jews and Gentiles, men and women, saints and sinners.

The Blind Man (May 20):
Finally, the Sixth Sunday commemorates the healing of the man blind from birth (John 9). We are identified with that man who came to see and to believe in Jesus as the Son of God. The Lord has anointed our eyes with His own divine hands and washed them with the waters of baptism (John 9: 6-11). In Christ we are given the power to see and confess Him as God’s only-begotten Son, and we are given the ability to comprehend clearly and with love, our own lives, the lives of others and the world around us.

Ascension, Pentecost and All Saints Sunday:
The Paschal Season ends with the great feast of Ascension (again, this year May 24) on which believers celebrate the Lord’s ascent in order to be glorified with God the Father and to glorify us with Himself. He goes in order to “prepare a place” for us, and to take us into the blessedness of God’s presence. He goes to open the way for all flesh into the “heavenly sanctuary…the Holy Place not made by hands” (See Hebrews 8-10). Furthermore, Christ ascends in order to send the Holy Spirit (an event celebrated on Pentecost) who proceeds from the Father, to bear witness to Him (Christ) and His Gospel in the world, by making Him (Christ) powerfully present in the lives of His disciples.On Pentecost the Church celebrates the final act of God’s self-revelation and self-donation to the world. God’s plan of salvation – starting with and including the formation of His chosen people, Israel; the sending of the prophets; the birth of Christ; His teachings, miracles, sufferings, death, burial and resurrection – all of this culminates with the giving of the Holy Spirit on Pentecost and the birth of the New Israel, the Church of God, the life of which is the continued presence of the Spirit in our midst.

The Sunday after Pentecost, that of All Saints (June 10), reveals the power of the Holy Spirit in this world, the reason that He was given. The Saints are those who, without a doubt, have been saved and transformed by the Spirit’s presence, a fate open to all who believe.

And then finally, on June 17, we commemorate All Saints of America, as a logical follow up to the previous Sunday. This celebration affirms God’s presence and activity amongst His disciples in North America, placing before us local and contemporary examples of sanctity.

Thus a journey which began for us way back on January 29 with the Sunday of Zacchaeus will, in a sense, end on June 17. But the journey was taken for a reason. The seasons of fasting and celebration that we have experienced are to lead us to a deeper faith in Christ as Savior. They are to instill within us a stronger commitment to our own mission, to be Christ’s witnesses “to the ends of the earth.” (Acts 1:8)