The Clerical Orders of the Church 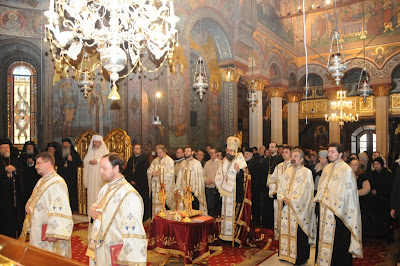 It was the mission of the Apostles to go forth into all the world and preach the Gospel, baptizing those who believed in the name of the Holy Trinity (Matthew 28:18–20). In the Early Church those who presided over congregations were referred to as episcopos (bishop) or presbyteros (presbyter/priest). These successors of the Apostles were ordained to their office by the laying on of hands, and according to Orthodox theology formed a living, organic link with the Apostles, and through them with Jesus Christ himself. This link is believed to continue in unbroken succession to this day. Over time, the ministry of bishops (who hold the fullness of the priesthood) and presbyters or priests (who hold a portion of the priesthood as bestowed by their bishop) came to be distinguished. In Orthodox terminology, priesthood or sacerdotal refers to the ministry of bishops and priests.

The Eastern Orthodox Church also has ordination to minor orders (Reader or Subdeacon) known as cheirothesia, "imposition of hands" which is performed outside of the Divine Liturgy, typically by a bishop, although certain archimandrites of stavropegial monasteries may bestow cheirothesia on members of their communities.

A bishop is the Teacher of the Faith, the carrier of Sacred Tradition, and the living Vessel of Grace through whom the energeia (divine grace) of the Holy Spirit flows into the rest of the church. A bishop is consecrated through the laying on of hands by several bishops. (With the consent of several other bishops, a single bishop has performed the ordination another bishop, in emergency situations, such as times of persecution), The consecration of a bishop takes place near the beginning of the Liturgy, since a bishop can, in addition to performing the Mystery of the Eucharist, also ordain priests and deacons. Before the commencement of the Holy Liturgy, the bishop-elect professes, in the middle of the church before the seated bishops who will consecrate him, in detail the doctrines of the Orthodox Christian Faith and pledges to observe the canons of the Apostles and Councils, the Typikon and customs of the Orthodox Church and to obey ecclesiastical authority. After the Little Entrance, the arch-priest and arch-deacon conduct the bishop-elect before the Royal Gates where he is met by the bishops and kneels before the altar on both knees and the Gospel Book is laid over his head and the consecrating bishops lay their hands upon the Gospel Book, while the prayers of ordination are read by the eldest bishop; after this, the newly consecrated bishop ascends the synthranon (bishop's throne in the sanctuary) for the first time. Customarily, the newly consecrated bishop ordains a priest and a deacon at the Liturgy during which he is consecrated.

A priest may serve only at the pleasure of his bishop. A bishop bestows faculties (permission to minister within his diocese) giving a priest chrism and an antimins; he may withdraw faculties and demand the return of these items. The ordination of a priest occurs before the Anaphora (Eucharistic Prayer) in order that he may on the same day take part in the celebration of the Eucharist: During the Great Entrance, the candidate for ordination carries the Aër (chalice veil) over his head (rather than on his shoulder, as a deacon otherwise carries it then) as a symbol of giving up his diaconate, and comes last in the procession and stands at the end of the pair of lines of the priests. After the Aër is taken from the candidate to cover the chalice and diskos, a chair is brought for the bishop to sit on by the northeast corner of the Holy Table (altar). Two deacons go to priest-elect who, at that point, had been standing alone in the middle of the church, and bow him down to the west (to the people) and to the east (to the clergy), asking their consent by saying “Command ye!” and then lead him through the holy doors of the altar where the archdeacon asks the bishop’s consent, saying, “Command, most sacred master!” after which a priest escorts the candidate three times around the Holy Table, during which he kisses each corner of the Holy Table as well as the bishop's epigonation and right hand and prostrates himself before the holy table at each circuit. The candidate is then taken to the southeast corner of the Holy Table and kneels on both knees, resting his forehead on the edge of the Holy Table. The ordaining bishop then places his omophor and right hand over the ordinand's head and recites aloud the first Prayer of Cheirotonia and then prays silently the other two prayers of cheirotonia while a deacon quietly recites a litany and the clergy, then the congregation, chant “Lord, have mercy”. Afterwards, the bishop brings the newly-ordained priest to stand in the Holy Doors and presents him to the faithful. He then clothes the priest in each of his sacerdotal vestments, at each of which the people sing, Worthy!. Later, after the Epiklesis of the Liturgy, the bishop hands him a portion of the Lamb (Host) saying:


Receive thou this pledge, and preserve it whole and unharmed until thy last breath, because thou shalt be held to an accounting therefore in the second and terrible Coming of our great Lord, God, and Saviour, Jesus Christ.

A deacon may not perform any Sacrament and, indeed, performs no liturgical services on his own but serves only as an assistant to a priest and may not even vest without the blessing of a priest. The ordination of a deacon occurs after the Anaphora (Eucharistic Prayer) since his role is not in performing the Holy Mystery but consists only in serving; the ceremony is much the same as at the ordination of a priest, but the deacon-elect is presented to the people and escorted to the holy doors by two sub-deacons (his peers, analogous to the two deacons who so present a priest-elect) is escorted three times around the Holy Table by a deacon, and he kneels on only one knee during the Prayer of Cheirotonia. After being vested as a deacon and given a liturgical fan (ripidion or hexapterygion)), he is led to the side of the Holy Table where he uses the ripidion to gently fan the Holy Gifts (consecrated Body and Blood of Christ).

*Only a rank in Russian/Slavic Churches, although it may be a title is other Churches.