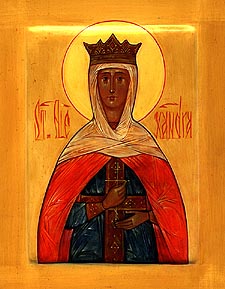 The Holy Empress Alexandra was the wife of Diocletian (284-305) and was so impressed by the courage and martyrdom of Saint George that she became a Christian and fell under the same persecution. Her feast day is 21 April.

Many events occurred during these years. In 305 the emperor Diocletian resigned the throne and power passed to his co-ruler Maximian Galerius (305-311), a fanatic pagan, as well as a coarse and fierce soldier. His wife was Saint Valeria, the daughter of the holy Empress Alexandra, whom Diocletian had given in marriage against her will.

Saint Alexandra raised her daughter in Christian piety. When Galerius died, the emperor Maximinus sought her hand in marriage. When he was refused, he banished Saint Valeria to Syria, where she lived with her mother.

After the death of Maximinus in 311 the mother and daughter arrived in Nicomedia, trusting in the mercy of the emperor Licinius (311-324). Together with Saint Constantine, he had subscribed to the Edict of Milan, which gave Christians the freedom of religion, but secretly he remained an enemy of Christianity. Licinius gave orders to execute the holy Empress Alexandra and her daughter Valeria. She also was condemned to be beheaded but when she arrived at the place of execution she asked to be allowed to sit down. Her request was granted. She sat down and died quietly before the executioners could carry out their task. They were beheaded, and their bodies thrown into the sea.

O Lord Jesus, unto Thee Thy lamb doth cry with a great voice: O my Bridegroom, Thee I love; and seeking Thee, I now contest, and with Thy baptism am crucified and buried. I suffer for Thy sake, that I may reign with Thee; for Thy sake I die, that I may live in Thee: accept me offered out of longing to Thee as a spotless sacrifice. Lord, save our souls through her intercessions, since Thou art great in mercy.