Servant Leadership: The Corps of Discovery

Founded in 1999 by a Venturing Crew, the purpose of the Corps of Discovery (COD) is to promote a stand alone servant leadership and service program within our home communities or religious institutions that youth groups, especially Venturing Crews, Sea Scout Ships, Scout Troops, and Exploring Posts can use to enhance their program and to service regardless of the endorsement of any national organization. The mission is to provide servant leadership to youth and adult members of youth groups through leadership training, program development, and service projects.

The COD is not an honor society so much as it is a unit-based co-educational Service organization. To be a member, one must simply be willing to commit to doing service, and ask to join the Corps of Discovery. The COD takes its name and symbolism from Lewis and Clark's historic Voyage of Discovery.

The Corps of Discovery is a Service Society for the youth and adults who have shown a willingness to promote service within their Scouting organizations, communities or within their religious institutions. It is intended for youth and adults who have gone beyond what would normally be expected by a unit member or unit leader; ones that provide widespread service. It should not be thought of as an inclusive precursor to the (newly made Co-Ed) Order of the Arrow (OA). It is a totally different animal. One must not choose between membership in one or the other. In fact, many CoD members are also OA members.

The Order of the Arrow is an optional Honor Society whose purpose is to promote camping in Boy Scouting. It is structured into a Lodges like Freemasonry. It's theme is based in American Indian culture, and its ceremonies involved dressing up as Native Americans.

The Corps of Discovery is a Service Society whose purpose is to provide service to Venturing, Scouting, Exploring, and our communities. It's theme is Servant Leadership and it is based on the Lewis and Clark Expedition. The moment depicted on the current pocket flap is when Sacagawea recognized her brother, Cameawhait, upon her return to Western Montana. She had been kidnapped by a rival tribe as a young girl and was returning to her home territory for the first time — as a member of the Corps of Discovery. The reason this moment is so important is because the Corps was in danger of failing at that moment, as they needed horses and directions in order to cross the Bitterroot Mountains into Idaho and Eastern Washington State before winter, which her brother provided.

The first pocket flap was a depiction of Meriwether Lewis and William Clark at the white bluffs of the Missouri Breaks at the moment they (thought they) could see the Continental Divide. It turned out they were seeing the Bearpaw Mountains and were a week or so away from the Rockies. 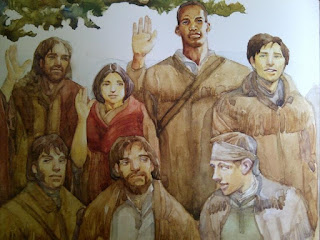 The next pocket flap, designed for the 20th anniversary of the Corps of Discovery, will show the leaders of the Corps voting on whether to spend the winter on the Washington State side of the Columbia River or to cross over to Oregon to winter near the present site of Astoria. Everyone in the Corps got a vote, including Sacagawea and York, Clark's slave. This was almost certainly the first time in American history that a woman and a black man got to vote in a major decision. The Corps voted to move to the southern shore of the Columbia and wintered at Fort Clatsop, a small log compound which they built themselves. That flap can be ordered in a variety a of shapes. Click here for more information on this special flap.

Here is the elevator speech version:


"The Corps of Discovery is a Service Society based on one of the greatest adventures in American history. The Order of the Arrow is an Honor Society based loosely on American Indian culture and Masonry."

The COD is not an official part of the Boy Scouts of America (although some BSA districts, councils, areas, and regions recognize it as an important part of their program) many units, including Venturing Crews, Sea Scout Ships, Scout Troops, and Exploring Posts are embracing the program for several reasons. Some of those reasons include:
For more information on the Corps of Discovery and how to join, please see https://www.TheCorpsOfDiscovery.org & https://www.SageThinking.org/COD.shtml as well as on Facebook at https://www.facebook.com/groups/16213695514/ and https://facebook.com/vcorpsofdiscovery.