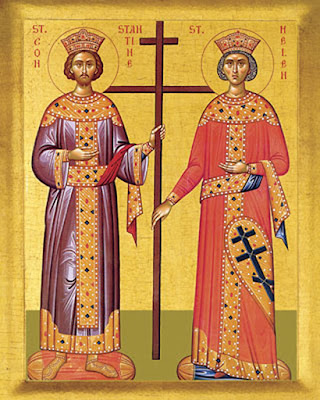 Equal to the Apostles Emperor Saint Constantine the Great (February 27, 272-May 22, 337) was proclaimed Augustus by his troops on July 25, 306 and ruled an ever-growing portion of the Roman Empire to his death. Constantine is famed for his re-founding of Byzantium as "New Rome," which was always called "Constantine's City"—Constantinople. With the Edict of Milan in 313, Constantine and his co-Emperor removed all onus from Christianity. By taking the personal step of convoking the Council of Nicea (325) Constantine began the Roman Empire's unofficial sponsorship of Christianity, which was a major factor in the faith's spread. His reputation as the "first Christian Emperor" was promulgated by Lactantius and Eusebius and gained ground in the succeeding generations. The Orthodox Church keeps his feast on May 21, along with his mother, Empress Saint Helen, as Holy Equals-to-the-Apostles.

He was born at Naissus, today's city of Niš in Upper Moesia (modern Serbia and Montenegro), to Constantius I Chlorus and an innkeeper's daughter, Helen. Constantine was well educated and served at the court of Diocletian in Nicomedia as a kind of hostage after the appointment of his father Constantius, a general, as one of the two Caesars (at that time a junior emperor), in the Tetrarchy in 293. In 305, the Augustus, Maximian, abdicated, and Constantius succeeded to the position. However, he died in 306. Constantine managed to be at his deathbed in Eboracum (York, England), where troops loyal to his father's memory proclaimed him Emperor. For the next 18 years, he fought a series of battles and wars that left him first as emperor of the west, and then as supreme ruler of the Roman Empire.

Constantine is perhaps best known for being the first Roman Emperor to endorse Christianity, traditionally presented as a result of an omen — a chi-rho in the sky, with the inscription "By this sign shalt thou conquer" — before his victory in the Battle of Milvian Bridge in 312, when Constantine is said to have instituted the new standard to be carried into battle, called the labarum.

Christian historians ever since Lactantius have adhered to the view that Constantine "adopted" Christianity as a kind of replacement for the official Roman paganism. Even Christian skeptics have accepted this formulation, though seeing Constantine's policy as a political rather than spiritual move.

By the end of the 3rd century, Christian communities and their bishops had become a force to contend with, in urban centers especially. Christians were preferred for high government positions; the Church was granted various special privileges; and churches like the Church of the Nativity in Bethlehem and the Church of the Holy Sepulchre in Jerusalem were constructed. Christian bishops took aggressive public stances that were unknown among other cult leaders, even among the Jews. Proselytism had had to be publicly outlawed, simply to maintain public decorum. In the essential legions, however, Christianity was despised as womanish, and the soldiers followed pagan cults of Mithras and Isis. Since the Roman Emperors ruled by "divine right" and stayed in power through the support of the legions, it was important for them to be seen to support a strong state religion. The contumely of the Christians consisted in their public refusal to participate in official rites that no one deeply believed in, but which were an equivalent of an oath of allegiance. Refusal might easily bring upon all the Roman people the loss of the gods' support; such were the usual justifications for occasional lynchings of Christians by Roman soldiers, the fare of many martyrologies.

Constantine and Licinius' Edict of Milan (313) neither made paganism illegal nor made Christianity a state-sponsored religion. What it did was legalize Christianity, return confiscated Church property, and establish Sunday as a day of worship. Though the church prospered under Constantine's patronage, it also fell into the first of many public schisms. He called the First Ecumenical Council to settle the problem of Arianism, a dispute about the personhood and Godhood of Jesus Christ. It produced the Nicene Creed, which favored the position of Athanasius, Arius's opponent, and became official doctrine.

When the Altar of Victory was desecrated and removed from its place of honor in the Senate, the Senate deputized Symmachus to appeal to the emperor for its return. Symmachus publicly characterized the late Emperor Constantine's policy, in a plea for freedom of religion:

He diminished none of the privileges of the sacred virgins, he filled the priestly offices with nobles, he did not refuse the cost of the Roman ceremonies, and following the rejoicing Senate through all the streets of the eternal city, he contentedly beheld the shrines with unmoved countenance, he read the names of the gods inscribed on the pediments, he enquired about the origin of the temples, and expressed admiration for their builders. Although he himself followed another religion, he maintained its own for the empire, for everyone has his own customs, everyone his own rites. The divine mind has distributed different guardians and different cults to different cities. As souls are separately given to infants as they are born, so to peoples the genius of their destiny.

His victory in 312 AD over Maxentius at the Battle of Milvian Bridge resulted in his becoming Western Augustus, or ruler of the entire western half of the empire. He gradually consolidated his military superiority over his rivals in the crumbling Tetrarchy until 324, when he defeated the eastern ruler, Licinius, and became sole emperor.

Constantine rebuilt the ancient Greek city of Byzantium, naming it Nea Roma (New Rome), providing it with a Senate and civic offices similar to the older Rome. After his death it was renamed Constantinople, and gradually became the capital of the empire.

He was succeeded by his three sons, Constantine II, Constantius II and Constans, who secured their hold on the empire with the murder of a number of relatives and supporters of Constantine. The last member of his dynasty was his grandson, Julian the Apostate, who attempted to restore paganism.

Having seen the figure of the Cross in the heavens,
And like Paul not having received his call from men, O Lord,
Your apostle among rulers, the Emperor Constantine,
Has been set by Your hand as ruler over the Imperial City
That he preserved in peace for many years,
Through the prayers of the Theotokos, O only lover of mankind.

Today Constantine and his mother Helen
Reveal the precious Cross,
The weapon of the faithful against their enemies.
For our sakes, it has been shown to be a great sign, and fearsome in battle.

About Camp Constantin
Camp Constantin is the flagship campground for Circle Ten. Located on 385 acres (1.6 km2) on the shores of Possum Kingdom Lake near Graford, Texas and containing 15 campsites, Constantin acts as both a regular camp open to Scouts from all areas and as Circle 10's largest and longest-running summer camp hosting roughly 2,800 Scouts during the 6 weeks it's open during the summer.

Camp Constantin was acquired by the Boy Scouts in 1946 when Eugene Constantin donated it, after the death of his son in World War II, to the group that he decided best served the needs, morals, and values of young men. The camp recently celebrated its 60th birthday and regularly plays host to International Scouts, most notably Scouting Ireland.

Within Camp Constantin is a sea Aquatics Base that was established by a generous donation from Circle Ten board member and former Constantin epitome staff member Jack D. Furst. The Aquatics area is the best maintained and most used Aquatics area within Circle Ten Council and one of the best in Texas. The Aquatics Base features a fleet of sailboats (consisting mainly of Sunfish and Hobie Cats), dozens of newly donated canoes, 5 ski boats, a two-year-old state-of-the-art swim dock, and a boat dock. Another popular feature are the "Blob" set out every summer. Because of Fursts' generosity and the area upkeep by epitome staff members it is able to offer the Swimming, Rowing & Canoeing, Motorboating, Lifesaving, Kayaking, Sailing & Advanced Sailing, and Water Skiing merit badges as well as Lifeguard training. Its Water Odyssey program is unique to the camp and is designed solely for Eagle Scouts, Venturers, and Sea Scouts.