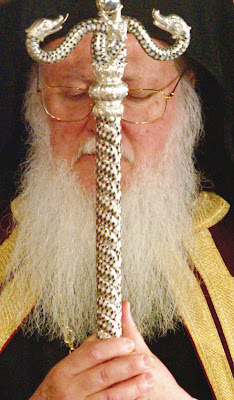 † BARTHOLOMEW
By the Mercy of God
Archbishop of Constantinople-New Rome
and Ecumenical Patriarch
To the Plenitude of the Church
Grace, Peace and Mercy from the Savior Christ, Risen in Glory

He became the first-born among the dead.
(Paschal Apolytikion, 3rd tone)

Beloved children in the Lord,

If Christ’s Resurrection referred to Himself, then its significance for us would be negligible. The Church proclaims, however, that, the Lord did not arise alone. Together with Himself, He also resurrected all people. This is how our predecessor, St. John Chrysostom, proclaims this great truth in thunderous language: “Christ is risen, and none are left dead in the grave; for in being raised from the dead, he became the first-fruits of all who were asleep.” This means that Christ became the first-fruits of the resurrection of all who have fallen asleep and who will fall asleep in the future, as well as of their transition from death to life. The message is a joyful one for us all because, with His Resurrection Christ abolished the power of death. Those who believe in Him await the resurrection of the dead and are accordingly baptized in His death, rise with Him and live on in life eternal.

The world that is alienated from Christ endeavors to amass material goods because it bases its hopes for survival on them. It unwisely imagines that it will escape death through wealth. Deceived in this way to amass wealth, supposedly to extend their present life, human beings disperse death among others, too. They deny others the financial possibility of survival, often even violently depriving others of life, in the hope of preserving their own life.

How tragic! What a huge deception. For life is only acquired through faith in Christ and incorporation in His body.

The experience of the Orthodox Church assures us that those united with Christ live even after death, coexist with the living, are in dialogue with them, can hear them and are often even capable of miraculously fulfilling their requests.

This means that it is no longer necessary to search for the “fountain of immortality.” Immortality exists in Christ and is offered by Him to all.

There is no need for some nations to be destroyed in order for other nations to survive. Nor is there any need to destroy defenseless human lives so that other human beings may live in greater comfort. Christ offers life to all people, on earth as in heaven. He is risen, and all those who so desire life may follow Him on the way of Resurrection. By contrast, all those who bring about death, whether indirectly or directly, believing that in this way they are prolonging or enhancing their own life, condemn themselves to eternal death.

Our Risen Lord Jesus Christ came into the world in order that all people “may have life and life in abundance” (John 10:10). We deceive ourselves if we believe that prosperity in the world can come from destroying one another. Christ raises the dead and invalidates their killing. Christ has the power to transcend death. Moreover, the fact that he conquered death confirms His contempt of death. Christ leads to life; He re-bestows life, which happens to be interrupted, because He is “our life and our resurrection.” This is why we, the faithful, do not fear death. Our strength lies not in the invulnerability of our existence but in its possibility for resurrection.


Christ is Risen! We, too, shall arise!
Therefore, beloved brethren and children in the Lord, let us follow the Risen Christ in all His works. Let us come to the assistance of those deprived of the means for survival so that their life may be preserved. Let us proclaim to all those who are ignorant of Christ’s Resurrection that, through this, death was abolished and, as a result, they too may share in His Resurrection by believing in Him and following His way. Our own resurrection is only possible when it is offered for the resurrection of others, of our brothers and sisters. Then alone will the triumphant proclamation that “Christ is Risen!” refer to the salvation for all of humanity. Let it be so!

Holy Pascha 2012
† Bartholomew of Constantinople
Your fervent supplicant for all