I LOVE The NFL PRO BOWL! 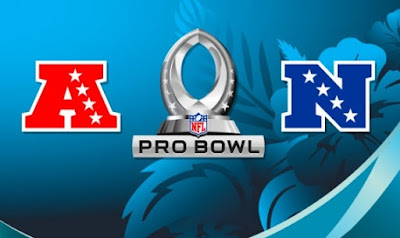 I love it! The best of the AFC vs. the best of the NFC. A forced 4-3 Defense (which I prefer to the 3-4 even though Green Bay runs it exclusively).

Unlike most other sports leagues, which hold their all-star games during (roughly) the halfway point of their respective regular seasons, the Pro Bowl is played at the end of the NFL season. The NFL's all-star game has a tattered image. It is the only major all-star game that draws lower ratings than its regular-season games. However, the biggest concern of teams is to avoid injuries to the star players.

The first "Pro All-Star Game," featuring the all-stars of the 1938 season (as well as three players from the Hollywood Stars and Los Angeles Bulldogs, who were not members of the league), was played on January 15, 1939 at Los Angeles's Wrigley Field. The NFL All-Star Game was played again in Los Angeles in 1940 and then in New York and Philadelphia in 1941 and 1942 respectively, after which the game was suspended due to World War II. The concept of an all-star game would not be revived until 1951, when the newly rechristened Pro Bowl played at various venues before being held at Aloha Stadium in Honolulu, Hawaii for 30 consecutive seasons from 1980 to 2009. The 2010 Pro Bowl was played at Sun Life Stadium, the home stadium of the Miami Dolphins and host site of Super Bowl XLIV, on January 31, the first time ever that the Pro Bowl was held before the championship game, with the conference teams not including players from the teams that will be playing in the Super Bowl. The 2011 Pro Bowl was played again in Hawaii, but again held during the week before the Super Bowl. The 2012 game is also scheduled for Hawaii.

Currently, players are voted into the Pro Bowl by the coaches, the players themselves, and the fans. Each group's ballots count for one third of the votes. The fans vote online at the NFL's official website. There are also replacements that go to the game should any selected player be unable to play due to injuries. Prior to 1995, only the coaches and the players made Pro Bowl selections.

The Pro Bowl head coaches are traditionally the head coaches of the teams that lost in the AFC and NFC championship games for the same season of the Pro Bowl in question (not the case for the 1980 and 81 seasons played in 1981 and 1982). However, for the 2010 and 2011 Pro Bowls, a new rule was presented: The teams that lose in the divisional playoff game with the best regular-season record will have their coaching staffs lead their respective conference Pro Bowl team. If the losing teams of each conference had the same regular season record the coaches from the higher-seeded team will get the Pro Bowl honor. This was, presumably, to allow the coaches more time with the players while the Pro Bowl is held during the week before the Super Bowl, since the conference championship losers would only have one week to prepare as opposed to three weeks when the Pro Bowl was held the week after the Super Bowl. 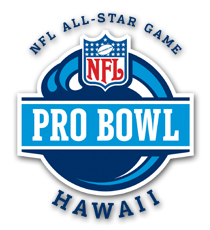 The Pro Bowl has different rules from other NFL games to make the game safer.


The teams are made of players from different NFL teams, so using their own uniforms would be too confusing. The players each wear the helmet of their team, but the home jerseys and pants are either a solid blue for the NFC or solid red for the AFC, while white jerseys with blue or red accents, respectively, for the away team. While it has been speculated that the color of Pro Bowl jerseys is determined by the winner of the Super Bowl, this is untrue. The design of Pro Bowl uniforms is changed every two years, and the color and white jerseys are rotated along with the design change. This has been Pro Bowl tradition since the switch to team specific helmets, which started with the January 1979 game. The two-year switch was originally created as a marketing ploy by Nike, and has been continued by Reebok, who won the merchandising contract in 2002.

The early Pro Bowl, contested by the National Football League's Eastern and Western Division stars and played at the Los Angeles Memorial Coliseum, featured the same uniforms from the 1950s to mid-1960s; the Eastern team wore scarlet jerseys with white numerals and a white crescent shoulder stripe, white pants with red stripe, red socks, and a plain red helmet. The Western team wore white jerseys with royal-blue numerals and a Northwestern University-style triple stripe on the sleeves, white pants with blue stripe and socks and a plain blue helmet. Perhaps oddly, the Eastern team, wore home dark jerseys, although the host-city team, the Los Angeles Rams, were members of the Western Conference. From January 1967 to January 1970 both teams wore gold helmets with the NFL logo on the sides; the Eastern helmets featured a red-white-red tri-stripe and the Western a similar blue-white-blue tri-stripe. In fact the players brought their own game helmets to Los Angeles, which were then spray-painted and decorated for the contest. (For the 1970 game the helmets featured the 50 NFL logo, commemorating the league's half-century anniversary.)

In the earliest years of the AFC–NFC Pro Bowl, the players did not wear their unique helmets, as they do now. The AFC All-Stars wore a solid red helmet with a white A on it, while the NFC players wore a solid white helmet with a blue N on it. The AFC's red helmets were paired with white jerseys and red pants, while the NFC's white helmets were paired with blue jerseys and white pants.

The 2008 Pro Bowl included a unique example of several players from the same team wearing the same number in a Pro Bowl. For the game, Washington Redskins players T Chris Samuels, TE Chris Cooley, and LS Ethan Albright all wore the number 21 (a number normally inappropriate for their positions) in memory of their teammate Sean Taylor who had been murdered during the 2007 season.

The Pro Bowl even has the best of the best cheerleaders cheering on the sides of the fields!

Email ThisBlogThis!Share to TwitterShare to FacebookShare to Pinterest
Labels: 2012, America, Football, The World