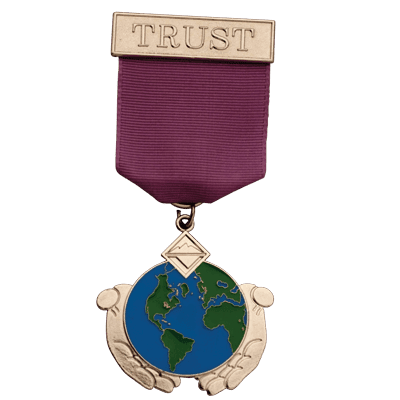 The following are the requirements for the Venturing and Sea Scouting TRUST Award. T.R.U.S.T. stands for:
I. Tending Your Faith and Beliefs
Complete the following:

1. Receive the religious emblem appropriate to your age and religious affiliation. (This is the Alpha Omega Award for Orthodox Christian Scouts in the United States of America.)

3. Explain the Scout Oath and the Scout Law in your own words. Explain how they have an effect on your daily life, your life goals, and how you live your life as a part of your community.

II. Respecting Beliefs of Others'
Complete the following:

3. Complete at least one of the following:


a. After extensive research on a selected religion, present a report to your crew or other youth group (such as a troop, crew, ship, religious group, or school group). The report should detail the history of the religion, its modern application as a religion, and important historical events. Also include information about where and how the religion is commonly practiced.

c. Meet with two youth working on a religious emblem approved by the BSA (Saint George or Chi Rho are the Eastern Orthodox Committee on Scouting Awards for younger youth). These young people can be members of the Boy Scouts of America, Girl Scouts of the USA, or any other youth organization. Discuss with them their current religious journey.

d. Contact an official in an inter-religious organization. Discuss how religious tolerance is important in both local and global issues.

e. Attend an inter-religious festival and talk with two people from another religion about the similarities and differences between your religion and theirs. Report your findings to your religious leader.

1. Learn about the culture you most identify with. Talk to relatives or other knowledgeable individuals to learn about your family history, cultural identity, and family identity.

2. Attend two cultural events. Supplement the information you learned at the events with research on the culture in today's global society. Compare these two events and their cultures with your own culture. Report on your findings to your crew or another youth organization.

3. Invite an adult and a youth from another culture to speak to your crew about their culture. Alternately, interview two people who were born outside the United States who have immigrated to your community or a nearby one. In either case, discuss with them why they decided to come to the United States and to your community. Discuss the differences in community between where they live now and where they lived before they emigrated.

4. Complete at least one of the following:


a. Take a course that includes study of cultural diversity.

b. Research and present your findings about an interreligious/intercultural conflict affecting the world in historical or current times. Include how the conflict started and ended. Explore both causes and effects of the conflict, including those in the current day. Include general information about all the cultures and religions involved in the conflict.

c. Research a cultural group that has had an impact on the U.S. melting pot. When did they begin to arrive? In what ways have they had an influence on the United States? On your community? Where have they settled; why? Report on your findings to your crew or youth group.

d. Meet with your council Scoutreach/urban/rural executive to learn which Scoutreach programs are being used in your area and why. Learn about BSA resources designed for specific, cultural groups, and how they may differ from the resources you are familiar with.

1. Plan and carry out a service project to better your local community. This project should be carried out in conjunction with an established community service agency. Involve at least five other Venturers or youth in carrying out the project. The project should be well thought out and lasting in its effects. Use the Eagle or Quartermaster Service Project booklet as a guideline. Be sure this project is reported to your council as part of the Good Turn for America campaign.

2. Meet with a member of your local government. Discuss how the community governs itself on matters such as zoning, taxes, education, religion, and acceptable behavior. Report your findings to your crew or another youth group. Lead or participate in a discussion on ideas to change your community for the better.

3. Complete at least one of the following:


a. Organize a community safety program. Options include a community watch program, a latchkey program, or other program to encourage safety in your community. This cannot be the same project used for requirement No. 1 above.

e. Participate for six months as an active volunteer with any other community service agency approved by your Advisor. Examples are therapy or guide dogs, food pantries, hospital aides, etc. Report on your experiences at the end of this time, especially how the community benefits from the organization and from your volunteerism.

1. Take part in a counseling skills training session of at least eight total hours. Examples include peer counseling, suicide or abuse hotlines, and first-contact training programs, and may be provided by local service agencies/hotlines or by local government divisions. Tell your crew what you learned and how you plan to put your knowledge into action.

2. Discover what addictions are having a negative effect on your local community (such as alcohol, drugs, tobacco, gambling, pornography, etc.). Pick one of these and find out what local resources are available to deal with the problem. Talk to a counselor who deals with this issue, and tell your crew how this issue is affecting the community in which you live.

3. Lead or actively participate in at least four Ethical Controversies within a six-month period. These may be at the unit, district, or council level within Venturing, or at a youth event attended by members of several churches or religious institutions.

4. Complete at least one of the following:


a. Attend a meeting of your local board of education or city/ community council, or a session of court. Find one issue that has generated dissent or conflict, and observe how this conflict is dealt with. Follow the issue to its resolution, even if this means attending more meetings. Give a presentation to your crew or other youth group on how conflict was resolved in this case.

c. Compare counseling degree programs at four different colleges or universities. Include one large public university and one small religiously based college. Look at both the types of degrees offered and the course work required for those degrees. Compare especially the religious components of such degrees.

d. Study the document "Scouts and Peace" prepared by the World Organization of the Scout Movement. Lead a discussion with your crew about the document and how Scouts can be involved in world peace. Then prepare a 10-minute presentation on the document and give it to a Boy Scout or Girl Scout Troop.