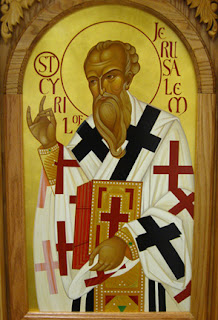 March 18, May 7
This Saint was born in 315, and succeeded Maximus as Archbishop of Jerusalem in 350. He was zealous for the Orthodox Faith, and was a defender of the poor. He was exiled three times by the Arian Emperors Constantius and Valens. But after their death, he was recalled to his throne; he reposed in peace in 386. Of his writings, the most prominent are his catechetical lectures, which are considered the most ancient systematic summary of Christian teaching. Before Saint Cyril, there had been two dioceses, one of Jerusalem, and one of Holy Sion; under Saint Cyril, they were united into one bishopric.

Apolytikion in the Fourth Tone
A model of faith and the image of gentleness, the example of your life has shown you forth to your sheep-fold to be a master of temperance. You obtained thus through being lowly, gifts from on high, and riches through poverty. Cyril, our father and priest of priests, intercede with Christ our God that He may save our souls.

Kontakion in the First Tone
Thy speech inspired of God hath enlightened thy people to honour the One God, undivided in essence, yet known and distinguished in His Three Persons, the Trinity. Wherefore, with great joy we keep thy holy remembrance, and we have thee as our intercessor, wise Cyril, to pray unto God for us.

Methodius & Cyril, Equal-to-the Apostles Illuminators of the Slavs
February 14, May 11
Born in Thessalonica, Saint Methodius was a military man before becoming a monk on Mount Olympus. Saint Cyril was born with the name Constantine in Thessaloniki in the early 9th century to pious parents. His family was one of only a few Byzantines in Thessaloniki at that time since it was largely populated by Slavs. Growing up in this situation, Cyril learned the Slavonic language, which later in life would serve him and the Church at large. He continued his education in Constantinople with his brother Methodius (see May 11th), each taking to their particular interests: Methodius in politics, and Cyril in philosophy and teaching.

Constantine, known as the Philosopher because of his erudition, was Librarian at the Church of the Holy Wisdom in Constantinople; he later became a monk with the name of Cyril. The Emperor Michael sent him with his brother Methodius to the Khazars in response to their petition for teachers to expound to them the Christian Faith. On their way, they stayed in Cherson, where they recovered from the Black Sea the relics of Saint Clement of Rome.

The two brothers were approached in 850 by Saint Photios the Great (see February 6th) to lead a diplomatic mission to the Khazars, the people who inhabited the western shore of the Caspian Sea. Cyril and Methodius accepted this mission and departed to the North. After the success of this trip, the brothers lived for a time in a monastery on Mount Olympus where Methodios became a monk. At this time the brothers utilized their childhood Slavonic education to develop a written alphabet for the Slavonic language, which to this time had never existed. This alphabet became known as the Glagolitic Alphabet. On their own instigation, the brothers began translating the Gospels and liturgical service books into Slavonic.

Later, they were called by Prince Rostislav of Moravia to instruct his people in the Orthodox Faith (Saint Rostislav died a martyr's death and is celebrated Oct. 15). In their apostolic labours throughout the Balkans, the holy brothers were slandered by certain Germanic bishops who opposed the use of the vernacular in the church services. After five years of service, the brothers made their way to Rome in 867 to have members of their company ordained to the priesthood to aid in the missionary journey. The presented their Slavonic translations to Pope Adrian II, who received them with love and full approval. The group of missionaries celebrated the Divine Liturgy in Rome in the Slavonic language for the very first time with members of their party being ordained as they intended. Two years later, Saint Cyril reposed in Rome on February 14 and was buried in the Church of Saint Clement.

Saint Methodius was made Bishop of Moravia, but at the intrigues of certain Latin clergy, was cast into prison by the "Holy Roman Emperor" (the Germanic Emperor of the West), where he was cruelly tormented for some three years. In 874, through the defense of Pope John VIII, he was freed and made Archbishop of Moravia. Because he reproved the lax morals of the German priests in Moravia, he was soon accused of heresy by them, and was forbidden to celebrate the Liturgy in Slavonic. Summoned to Rome again in 879, he was completely exonerated and allowed once again to use the Slavonic tongue for the divine services. He reposed on April 6, 885.

Apolytikion in the Fourth Tone
Since ye were equal in character to the Apostles, and teachers of the Slavic lands, O divinely-wise Cyril and Methodius, pray to the Lord of all to strengthen all nations in Orthodoxy and unity of thought, to convert and reconcile the world to God, and to save our souls.

Kontakion in the Third Tone
Let us honour our sacred pair of enlighteners, who, by translating the divine writings, have poured forth for us a well-spring of divine knowledge from which we draw abundantly even unto this day: We call you blessed, O Cyril and Methodius, ye that stand before the throne of the Most High and intercede fervently for our souls. 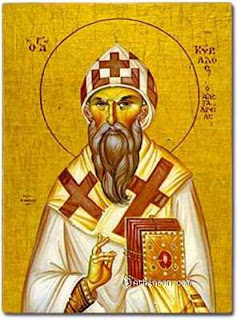 Cyril, Patriarch of Alexandria
January 18, June 9
On June 8 day we commemorate Saint Cyril's falling asleep. On January 18 we commemorate the occasion of the Saint's restoration to his see in Alexandria after he had suffered a brief exile because of the machinations of the Nestorians. Shortly thereafter the Third Ecumenical Council was convoked in Ephesus and the blasphemous doctrine of Nestorius was condemned.

Saint Cyril was from Alexandria, born about the year 376. He was the nephew of Theophilus, Patriarch of Alexandria, who also instructed the Saint in his youth. Having first spent much time with the monks in Nitria, he later became the successor to his uncle's throne in 412. In 429, when Cyril heard tidings of the teachings of the new Patriarch of Constantinople, Nestorius, he began attempting through private letters to bring Nestorius to renounce his heretical teaching about the Incarnation. When the heresiarch did not repent, Saint Cyril, together with Pope Celestine of Rome, led the Orthodox opposition to his error. Saint Cyril presided over the Third Ecumenical Council of the 200 Holy Fathers in the year 431, who gathered in Ephesus under Saint Theodosius the Younger. At this Council, by his most wise words, he put to shame and convicted the impious doctrine of Nestorius, who, although he was in town, refused to appear before Patriarch Cyril. Saint Cyril, besides overthrowing the error of Nestorius, has left to the Church full commentaries on the Gospels of Luke and John. Having shepherded the Church of Christ for thirty-two years, he reposed in 444.

Apolytikion in the Plagal of the Fourth Tone
You are a guide of Orthodoxy, a teacher of piety and modesty, a luminary of the world, the God inspired pride of monastics. O wise Cyril, you have enlightened everyone by your teachings. You are the harp of the Spirit. Intercede to Christ our God for the salvation of our souls.

Kontakion in the Fourth Tone
Thou with the power of Christ Saviour's divine words didst rend asunder all the webs of the heresies and didst enrich the Church by cutting down the tares of profane Nestorius, O our blest Father Cyril; wherefore, in Christ's presence now with the choirs of the Angels thou intercedest fervently with Him to grant forgiveness of failings to all of us.