My DNA: Tracing my ancestory to Noah, Adam, and Eve!

I recently had my DNA tested by 23andMe. If you'd like to check out your DNA, you can save by registering at this link: https://refer.23andme.com/s/ir2tk I guarantee that you will find it fascinating!

Most of it was unsurprising, such as having Irish ancestry. My paternal grandfather was born in Ireland shortly before immigrating with his mother, Queen Tobin Stanosheck to America. Recently we learned that my maternal grandfather's family had lived in Ireland for some time before immigrating to America. Through my maternal line it appears we are related to Clan McLaren/MacLaren too.

Both my maternal grandmother's and grandfather's families had lived in Germany so having German DNA was not surprising.

Now the last names of my grandfathers are Polish-Russian and Welsh. So having DNA from Poland and Great Britain was not a surprise. But what was a surprise was that although my last name is a blend of Polish and Russian, I have no Russian DNA, but do have Ukrainian DNA. (I've actually had an intuition about this before getting tested).

Surprise #2 is that we were always told that my maternal grandmother was Czech, but according to my DNA, she was actually Slovak, as I have Slovak DNA but no Czech DNA. 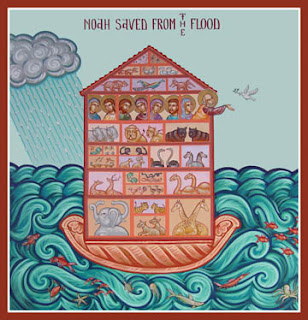 Surprise #3 is that my DNA can be traced all the way back to Noah. We are related to Noah via his son, Japheth, his grandson Gomer, and his great-grandson, Ashkenaz.

It looks like someone in my ancient family members moved from Syria to the Slavic lands, and then up to Scandinavia. Where exactly, my DNA doesn't know, but it was in my mother's side of the family.

So many people who get their tests done get surprise African or Asian DNA, but my test showed my DNA to be solely European (as far as it can go back). Here is the exact (to 99.98% accuracy) breakdown: 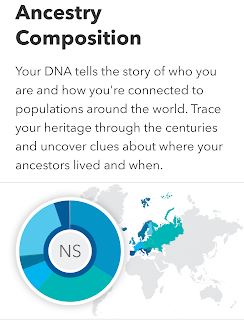 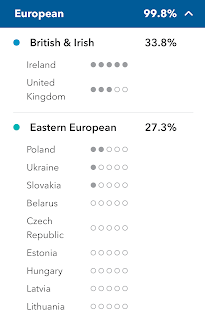 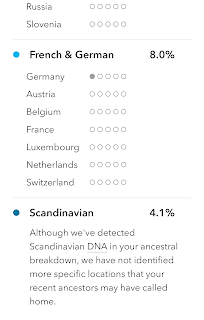 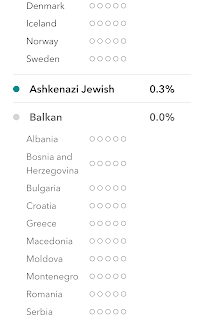 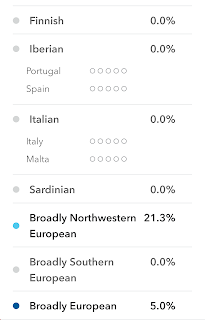 Here are the histories that my DNA tells:

The stories of all of our paternal lines can be traced back to just one man: the common ancestor who lived in eastern Africa at the time, Adam.

Your paternal-line ancestors gradually moved north, following available prey and resources as a shifting climate made new routes hospitable and sealed off others. Then a small group ventured across the Red Sea and deeper into southwest Asia. Your ancestors were among these men, and the next step in their story is marked by the rise of  your ancestors in the Arabian Peninsula.

Passing through the Middle East, your paternal-line ancestors continued on to the steppes of Central Asia, vast grasslands stretching all the way from central Europe to the eastern edge of Asia.

The next step in your story can be to the common ancestor of a man who likely lived in Central Asia. His descendants roamed the vast steppes of the continent, where they hunted huge mammals like the mammoth.

Your ancestral path forked off again in western Asia, but farther south in the Iranian Plateau your ancestors flourished.

As the people of the Fertile Crescent domesticated plants and animals for the first time. Around 8,000 years ago, the first farmers and herders began to push east into Central Asia and north into the Caucasus Mountains. Some of them eventually reached the steppes above the Black and Caspian Seas. There, they lived as pastoral nomads, herding cattle and sheep across the grasslands, while their neighbors to the south developed yet another crucial technology in human history: bronze smelting. As bronze tools and weaponry spread north, a new steppe culture called the Yamnaya was born.

Perhaps triggered by a cold spell that made it difficult to feed their herds, Yamnaya men spilled east across Siberia and down into Central Asia. To the west, they pushed down into the Balkans and to central Europe, where they sought new pastures for their herds and metal deposits to support burgeoning Bronze Age commerce. Over time, their descendants spread from central Europe to the Atlantic coast, establishing new trade routes and an unprecedented level of cultural contact and exchange in western Europe.

The men from the steppes also outcompeted the local men as they went; their success is demonstrated in the overwhelming dominance of the lineage in Europe, especially Ireland and Wales.

You descend from a long line of women that can be traced back to eastern Africa. If every person living today could trace his or her maternal line back over thousands of generations, all of our lines would meet at a single woman who lived in eastern Africa, Eve. The story of your maternal line begins with her it. 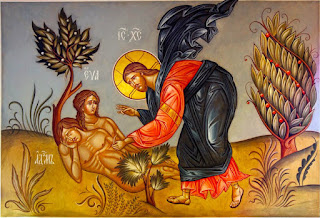 While many of her descendants remained in Africa, one small group ventured east across the Red Sea, likely across the narrow Bab-el-Mandeb into the tip of the Arabian Peninsula.

Your story continues with one of two branches that arose from southwestern Asia. Researchers have long debated whether they arrived there via the Sinai Peninsula, or made the hop across the Red Sea at the Bab-el-Mandeb. Though their exact routes are disputed, there is no doubt that the women migrated across all of Eurasia, giving rise to people from Portugal to Polynesia.

One of those branches traces back to a woman who likely lived in the Middle East or the Caucasus Mountains. Her descendants appear to have migrated into northern Europe, and then through southwestern Asia as far as Pakistan with the expansion of agriculture about 8,000 years ago.

Women carrying this haplogroup likely migrated into and across Europe during this stretch of milder climate.

Today, they are mostly spread across southeastern Europe and into the Middle East, including in the North Caucasus and northern Iran. Some can also be found in the northern and western reaches of Europe, including in Britain, Finland, and even western Siberia.
No comments: