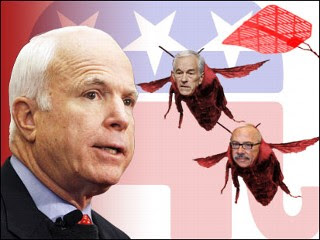 I just received my mail-in ballot and am surprised at the number of third parties on the ballot. Pleasantly surprised! But I wonder how they decide the order to list them. I think it should be alphabetical order, but I think it is in the numerical vote order for that party in the last election, hence the Republican Party is listed, followed by the Democrat Party, Constitution Party, Libertarian Party, Green Party, and so on.. I find it interesting that my new county of residence uses the retarded "complete the arrow system" and does not allow a write in candidate for POTUS or Congressman, but does for Senator. For the record, I am actually voting one of the 2 big parties for POTUS but 3rd party for Senate. I have to vote big 2 for Congressman, as no other party has a candidate running. Of course, not knowing the judges here, I am not voting for or against any of them.

While the POTUS race seems to be tightening up between the 2 major parties, it was interesting to hear on NPR last night that Sarah Palin is going rogue and standing up for conservative ideals and no longer staying on McCain's talking points, looking out for herself, supposedly due to her knowing that McCain will lose.

Here are the people on the Colorado ballot for POTUS & VEEP:
I think a couple of these parties could use come consolidation, like the 3 Socialist parties; The Green and Pacifist parties; and the Constitution, Boston Tea, and Independent parties; etc. Interesting to see that neither the Independence nor Reform parties are running any candidates this year!

Imagine how much better the Presidential Candidate Debates, currently monopolized by the big two parties, would be if they allowed at least the Constitution, Libertarian, and Green parties have their candidates debate too!

Of note, for ID, I had to enclose a copy of a utility bill with my address since I am a new residence of this county!

My Wedding Announcement in the Pueblo Chieftain! 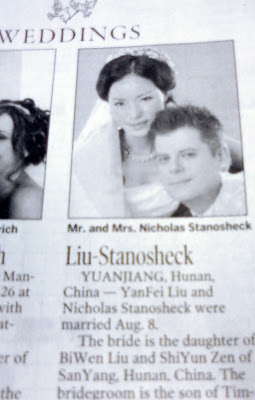 See http://picasaweb.google.com/feisnik/WeddingPhotos#5259043951354999650 for a better resolution camera phone shot of the article from today's LIVING section of the PUEBLO CHIEFTAIN here in Colorado, USA.

Learn Mandarin, Cantonese, Taiwanese, HuLanHua, or any other dialect of Chinese for FREE!
No comments:

Check out this interesting answer on Yedda

Temporary passport replacement
You just need to fill out the online form at https://pptform.state.gov/FraudAbuseNotice.aspx?form=DS5504 then print of the document, sign it, and mail it in to:

Answered by feisnik on October 18, 2008
View the entire discussion on Yedda

XKCD so has me pegged!

Books of Interest on China

If you are interested in going to China, or just enjoy others' stories about going there to live, to find romance, and adventure, the following books, IMO, are must reads.

First is Peking Story: The Last Days of Old China

, a book about a Western man who was teaching English in China at the beginning of the Communist Revolution. He finds love, marriage, and an ever changing political climate that is fascinating to read, especially for someone who knows modern China of 2008 and can compare it to the China David Kidd once knew.

Next is Iron & Silk

, another great story of an English teacher and now filmmaker named Mark Salzman, who falls in love with China, almost finds romance, and ends up being taught Chinese martial arts from many masters. This story is from a city in HuNan Province that I love, ChangSha, and shows big changes since the 1980's.

Finally we have Matthew Polly's often hilarious American ShaoLin: Flying Kicks, Buddhist Monks, and the Legend of Iron Crotch: An Odyssey in the New China

, which is an autobiographical book about a young man going to China to learn Kung Fu at the ShaoLin Temple before it became a tourist trap. He finds meaning, strength, romance, and enlightenment and will have you laughing for hours.

I actually read these books in the reverse order and having been to China many times, I found each entertaining and educational. China is ever more open than the most recent book, American ShaoLin, relates to the reader, but the 3 books show how China has changed over the past 60 years. "Iron & Silk" is now a movie and "American ShoLin" will soon be one too, but I think the books are still the way to go. I hope that one day "Peking Story" will be put on the big screen as well.

Through the magic on the Interwebs and QOOP, everyone can buy our wedding album for the low, low price of only $49.99 here. You can also see the first 15 pages there as well. This is cheaper than purchasing one in China and shipping it over to America via FedEx.

Learn Mandarin, Cantonese, or any other dialect of Chinese for FREE!
2 comments: