My Tony Romo at the Lead & Succeed 2013 DFW Experience

Yesterday I went to LEAD AND SUCCEED 2013 at the Verizon Theater on the edge of Grapevine and Dallas, Texas. There were some great speakers, and it was nice that the majority were good to point out that possessions become idols and that the reason to get rich is to help others, and that when you help others you find true happiness. The message of forgiveness was taught too, saying revenge was just giving yourself poison and hoping the other person dies from it.

Unfortunately there were some negative aspects. People were supposed to tweet and post on Facebook during the event, but unless you were using a Verizon 4G phone, you most likely did not have any kind of signal. People on T-Mobile, Sprint, and AT&T were unable to participate. Also, Rick Carlisle spoke, but was booed a lot because he constantly cussed, using F-Bombs, S-Bombs, and such.

Overall it was a mostly pan-Christian message of how to succeed in business, sales, and leadership. It ended with Tony Romo, who actually had one of the most powerful messages of the conference. He told us, when asked about what career goals will mean the most to him, when speaking of his records, that when you are 80, only 3 things will matter. Those three things are, were you a good husband, were you a good father, and are you going to make it to heaven.

If you are interested in going to the LEAD AND SUCCEED 2013 conference, there are 2 more left, one on the west coast and one on the east coast, and with the links I am providing, you can get in at my discounted rate:

Also, since I went, I am able to go to the following upcoming Dallas conferences at the VIP discounted rate, so I wanted to pass the links to share my discounted rates with you:. If you live outside of the DFW Metroplex and are interested in these conferences, click the links anyway and find ones that may be close to your location. There are events in Alabama, Georgia, Florida, North Carolina, California, Texas, and other states as well! 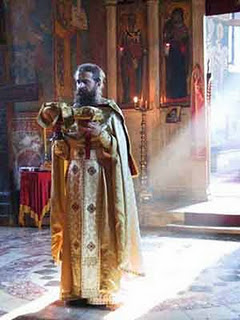 When we address Deacons or Presbyters (Priests), we should use the honorific, "Father." Bishops we should address as "Your Grace." Though all Bishops (including Patriarchs) are equal in the Orthodox Church, they do have different administrative duties and honors that accrue to their rank in this sense. Thus, "Your Eminence" is the proper honorific for Bishops with suffragans or assistant Bishops, Metropolitans, and most Archbishops (among the exceptions to this rule is the Archbishop of Athens, who is addressed as "Your Beatitude"). "Your Beatitude" is the proper honorific for Patriarchs. When we approach an Orthodox Presbyter or Bishop, we (if a monastic: make a bow by reaching down and touching the floor with our right hand), place our right hand over the left (palms upward), and say: "Father, Bless," (or "Bless, Your Grace," or "Bless, Your Eminence," etc.). The Priest or Bishop then answers, "May the Lord bless you," blesses us with the Sign of the Cross, and places his right hand in our hands. We kiss then his hand. It is, however, correct to kiss the hand of a Deacon, just as we do that of an Abbot (even if not a Priest) or Abbess of a monastery or a revered monastic, out of respect or as a sign of dedication.
We should understand that when the Priest or Bishop blesses us, he forms his fingers to represent the Christogram "ICXC" a traditional abbreviation of the Greek words for "Jesus Christ" (i.e., the first and last letters of each of the words "IHCOYC XRICTOC"). Thus, the Priest's blessing is in the Name of Christ, as he emphasizes in his response to the believer's request for a blessing. Other responses to this request are used by many clergy, but the antiquity and symbolism of the tradition which we have presented are compelling arguments for its use. We should also note that the reason that a lay person kisses the hand of a Priest or Bishop is to show respect to his Apostolic office. More importantly, however, since both (as well as the deacon) hold the Holy Mysteries in their hands during the Divine Liturgy, we show respect to the Holy Eucharist when we kiss their hands. In fact, Saint John Chrysostomos once said that if one were to meet an Orthodox Priest walking along with an Angel, that he should greet the Priest first and kiss his hand, since that hand has touched the Body and Blood of our Lord. While a Deacon in the Orthodox Church holds the first level of the Priesthood (Deacon, Presbyter, Bishop), his service does not entail blessing the Mysteries. When we take leave of a Priest or Bishop, we should again ask for a blessing, just as we did when we first greeted him.
In the case of married clergy, the wife of a Priest or Deacon is also informally addressed with a title. Since the Mystery of Marriage binds a Priest and his wife together as "one flesh," [Genesis 2:24; St. Matthew 19:6; St. Mark 10:8.] the wife shares in a sense her husband's Priesthood. This does not, of course, mean that she has the very Grace of the Priesthood or its office, but the dignity of her husband's service certainly accrues to her. [See: A Guide to Orthodox Life] The various titles used by the national Churches are listed below. The Greek titles, since they have English correspondents, are perhaps the easiest to use in the West:

Top 5 Green Bay Packers Players and Coaches of All Time

Over the last year, I have seen many top 5 lists of Green Bay Packers, but here is my opinion. The top 5 needs to be a top 5 of only players and then top 5 of coaches that includes players who were coaches. The coaches may not have been the best coaches, but they were coaches and a top player, so they go on the coach list. After the 5, I will add an honorable mention, as they are a close contender for a top-5 position. I will not number the top 5, because it is too close to call. I list them in order of when they started their earliest position. I only list players who played 5 years or more for the Green Bay Packers, as many greats played for less, but to me, they needed to play 5 years to be all-time greats. I also will not list Quarterback Aaron Rodgers (who is a 3 time Pro Bowler (2009, 2011, 2012), an AP First-Team All-Pro (2011), an AP Second-Team All-Pro (2012), an AP NFL MVP (2011), a PFWA NFL MVP (2011), a Super Bowl champion (XLV), a Super Bowl MVP (XLV), the FedEx Air NFL Player of the Year (2010), and the Associated Press Athlete of the Year (2011)) or Head Coach Mike McCarthy (who is a Superbowl champion in 2010(XLV) and NFC Champion (2010)), because they are still playing and coaching, respectively. However, after they retire, they will definitely go on this list, unfortunately knocking someone off.