Corps of Discovery's 20th Anniversary Flap Patch Available to pre-order NOW for Sea Scouts, Venturers, and all other Scouts & Scouters!

For the 20th anniversary of the Corps of Discovery (nee the Venturing Corps of Discovery) Service Organization, 2 special patches are being made in very limited quantities. There will be 200 traditional flaps (for Scouts BSA and Venturing BSA uniforms) and 50 hexagon flaps for both Sea Scouts BSA uniforms and red wool BSA Jac-Shirts. If you would be interested in pre-ordering one (or more) of these limited time, limited edition flaps celebrating the 20th anniversary of the Corps of Discovery, please contact Dr. Craig Murray at https://www.sageventure.com/store/COD20.html and pre-order them A.S.A.P.. The ordering window is very short!

The images will look even better once they are made into flaps and are on your uniforms. Craig's patches, knots, and flaps are always exquisite, which you can see from this picture of my latest BSA Scouter uniform shirt. 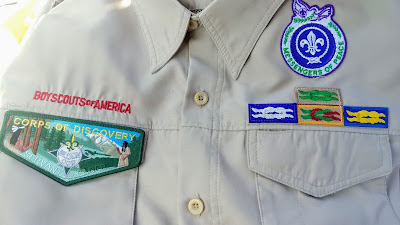 The first item used for recognition was a animal tooth that hung on a wire from the right pocket. Later, a western region Venturing leader asked Dr. Craig Murray to design a pocket flap. The first flaps were presented to youth who completed a Kodiak training course in 2005 and made a promise to take on a simple service project when he or she got home. Some of the projects were as complex as helping with Scoutreach camps, Powder Horn, and VOAs, and others were as simple as recruiting some friends to join their Units.

Below is the history of the Corps of Discovery flap, from oldest to newest, showing only the traditional Scouts BSA style/current Venturing style flap and the older Venturing style flap, as this is the first one with a design ever made specifically for Sea Scouts pocket flaps! As you can see, the quality improves over the 20 years that the Corps of Discovery has been around!

Here are some additional special Corps of Discovery flaps that were made for special occasions as well.

Make sure you do not miss out on this limited time opportunity and pre-order these special flaps for both yourself and your friends in (or soon to be in) the Corps of Discovery today!

UPDATE: The limited edition flap patches are in. See https://orthodoxscouter.blogspot.com/2019/07/the-corps-of-discoverys-20th.html for details and order the very limited remaining stock while supplies last!
3 comments: