It all started on an early Thursday morning

At 8:00 we had dropped off my daughter Raven

appointment. Tomorrow we would be going to the Divine Services of the Dormition of the Theotokos

Unfortunately, something was awry, my unborn son, Daniel ZiJun

had a low heartbeat (120 BPM), so they sent us from the local JPS

clinic in Watauga to the JPS hospital in Fort Worth.

There they monitored him for a while and found that his heartbeat was high (160 BPM).

Then it spiked low. Under observation they could see that when my wife was having contractions, and every time that she had one, his heart rate was going down. After further investigations, it was deemed that she had too little amniotic fluid

now. They decided they would keep her for observation until the baby was born. 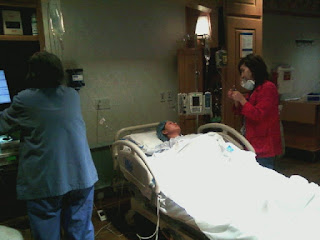 
A note about the night crew: They had never been scheduled together, but by the Grace of God

, there was a Chinese nurse, a Chinese doctor, and a half Chinese doctor on this shift. This meant that detailed medical information could be readily communicated to my wife instead of through e as is usually done. This proved to be such a blessing in so many ways, but for it, I must give glory to Him!

The last time the heart rate went down, she had just gotten an epidural, and Daniel's heartbeat was not simply down to 100 BPM from a regular 140, but 50 beats per minute, and they could not get it to go up. So they decided to do an emergency c-section

did nothing for Fei and as soon as the Chinese doctor administered a local anesthetic, she started counting the minutes for it to kick in, but the other doctoral called it as too late, and made the cut. Fei felt everything. She said she could bear the cut, but pulling Daniel out made her feel like she was dying. Immediately thereafter the Chinese doctor gassed Fei and knocked her out.

I heard Daniel crying and knew he was fine. Everyone kept telling me my baby was fine, but I was worried about my wife. Thankfully the Chinese doctor pulled rank and allowed me in to see Fei, even though this was not usually allowed in such situations. In time she was moved to recovery and put on Morphine

for the night and then switched to Vicodin

Many more things happened over the last 3 days, but here is a picture of our newly extended family of 4! 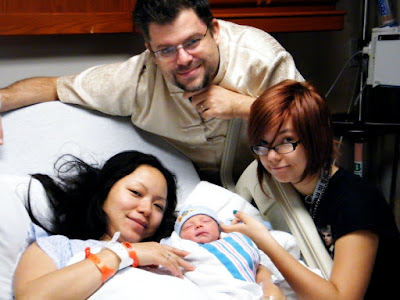