The Transfiguration of Christ by Metropolitan Kallistos 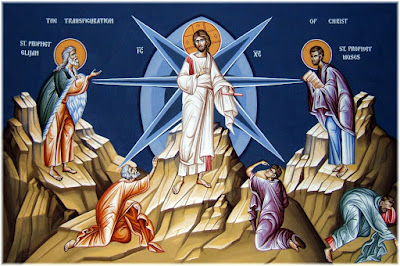 This is a feast that enjoys far greater prominence in Orthodoxy than in western Christendom. In the Roman rite, the Transfiguration is merely a “double of the second class,” while the Anglican Prayer Book of 1662 does not even provide a special Collect, Epistle, or Gospel for this day. (This omission has been rectified in the 1928 Book, as also in the revisions of the Book of Common Prayer used in many parts of the Anglican Communion overseas).

In the Orthodox Church tradition August 6 is reckoned as one of the Twelve Great Feasts, of such importance that it supplants the Sunday office entirely (when the feast is observed on the Lord’s Day).

The Transfiguration is par excellence the feast of Christ’s divine glory. Like Theophany (January 6), it is a feast of light. During Matins the exapostilarion for the day states: “Today on Tabor in the manifestation of Thy Light, O Word, Thou unaltered Light from the Light of the unbegotten Father, we have seen the Father as Light and the Spirit as Light, guiding with light the whole creation.”

Nor is this the only parallel between the two feasts. Like Theophany, although less explicitly, the Transfiguration is a revelation of the Holy Trinity. On Tabor, as at the baptism in Jordan, the Father speaks from heaven, testifying to the divine Sonship of Christ; and the Spirit is also present, on this occasion not in the likeness of a dove, but under the form of dazzling light, surrounding Christ’s person and overshadowing the whole mountain. This dazzling light is the light of the Spirit.

The Transfiguration then, is a feast of divine glory; more specifically of the glory of the Resurrection. The ascent of Mount Tabor came at a critical point in Our Lord’s ministry, just as He was setting out upon His last journey to Jerusalem, which He knew was to end in humiliation and death. To strengthen His disciples for the trials that lay ahead He chose this particular moment to reveal to them something of His eternal splendor, “as far as they were able to bear it“ (Troparion of the Feast). He encouraged them — and all of us — to look beyond the suffering of the Cross to the glory of the Resurrection.

The light of the Transfiguration, however, foreshadows not only Christ’s own Resurrection on the third day, but equally the Resurrection glory of the righteous (ones) at His Second Coming. The glory which shone from Jesus on Tabor is a glory in which all mankind is called to share. On Mount Tabor we see Christ’s human nature — the human substance which He took from us — filled with splendor, “made godlike” or “deified.” What has happened to human nature in Christ can happen also to the humanity of Christ’s followers. The Transfiguration then, reveals to us the full potentiality of our human nature: it shows us the glory which our manhood once possessed and the glory which, by God’s grace, it will again recover at the Last Day.

This is a cardinal aspect of the present feast, to which the liturgical texts frequently revert. For example, it is said at Great Vespers that at His Transfiguration the Lord, “in His own person showed them the nature of man, arrayed in the original beauty of the Image.” Similarly at Matins one hears, “Thou wast transfigured upon Mount Tabor, showing the exchange mortal men will make with Thy glory at Thy second and fearful coming, O Savior.”

The feast of the Transfiguration, therefore, is not simply the commemoration of a past event in the life of Christ. Possessing also an “eschatological” dimension, it is turned towards the future, towards the “splendor of the Resurrection” at the Last Day, towards the “beauty of the divine Kingdom” which all Christians hope eventually to enjoy. (From the Festal Menaion)