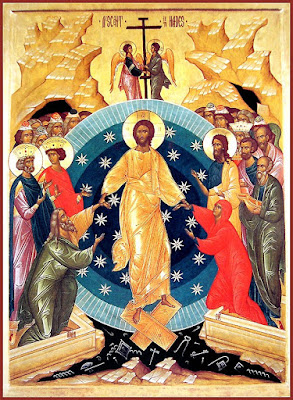 Over the Lenten and Paschal season there have been many news stories how modernistic "Christians" are removing from the Apostles' Creed the part about Jesus' Descent in to Hades, even though the event is completely Biblical. Well now, I hear that modern Christians are now even denying Hades' existence, saying it is a theological invention. Funny, since their religion is a modern made-up invention having nothing to do with the longstanding teachings of the Church. Who are they to call this teaching an invention?

Here is the Apostles' Creed just as an FYI:


I believe in God, the Father almighty, creator of heaven and earth.
I believe in Jesus Christ, His only Son, our Lord.
He was conceived by the power of the Holy Spirit and born of the Virgin Mary.
He suffered under Pontius Pilate, was crucified, died, and was buried.
He descended to Hades. On the third day he rose again.
He ascended into Heaven and is seated at the right hand of the Father.
He will come again to judge the living and the dead.
I believe in the Holy Spirit,
the holy catholic Church, the communion of saints,
the forgiveness of sins,
the resurrection of the body,
and life everlasting.
Amen.

Now I will agree that the Nicene-Constantinopolitan Creed is better, but for whatever reason, many Western Christians prefer the Apostles' Creed, so we will go with that. I will also look at various Bible versions which are not my favorites, and may translate the Greek word άδης differently, just to show a point. The original Greek clearly says that there is a Hades and that Jesus, who is the Christ, God the Son, descended to it.

So, what is Hades, exactly? The Old Testament view of the afterlife was that all people, whether righteous or unrighteous, all went to Sheol/Hades when they died. No Hebrew figure ever descended into Sheol/Hades and returned. Several works from the Second Temple period elaborate the concept of Sheol, dividing it into sections based on the righteousness or unrighteousness of those who have died.

The New Testament maintains a distinction between Hades, the common "place of the dead", and the eternal destiny of those condemned at the Final Judgment, variously described as Gehenna, "the outer darkness," or a lake of eternal fire. Some Modern English translations of the Bible maintain this distinction (e.g. by translating Hades as "the Pit" and Gehenna as "Hell"), but the influential King James Version used the word "hell" to translate both concepts causing mass confusion, it seems.

After the soul leaves the body, it journeys to the abode of the dead (Hades). Before Christ came, this was the end, except that these souls that knew, expected the Christ to come to them and be their Saviour. When we die, we must remain in this condition of waiting. Because some have a prevision of the glory to come and others foretaste their suffering, the state of waiting is called "Particular Judgment". When Christ returns in His second glorious coming, the soul rejoins its risen and perfected body to be judged by Him in the Last judgment. The 'good and faithful servant' will inherit eternal life, the unfaithful with the unbeliever will spend eternity in hell. Their sins and their unbelief will torture them as fire." A final Universal Judgment will be pronounced on all human beings when soul and body are reunited in the resurrection of the dead. The fate of those in the abode of the dead differs, even while awaiting resurrection: "The souls of the righteous are in light and rest, with a foretaste of eternal happiness; but the souls of the wicked are in a state the reverse of this."

So now that we understand what Hades is, let's look more in to where Hades and Christ's descending is mentioned in the Old and New Testaments.

(the ancient pre-Christian, pre-Masoretic translation of the Old Testament into Greek which is older than the modern Hebrew versions available today), the Greek term "ᾅδης" (Hades) is used to translate the Hebrew term "שׁאול" (Sheol) in, for example, Isaiah 38:18. This use refers the term hades to the abode of the dead in general, rather than the abode of the wicked.

In the textus receptus version of the New Testament, on which the English King James Version is based, the word "ᾅδης" (Hades), appears 11 times; but critical editions of the text of 1 Corinthians 15:55 have "θάνατος" (death) in place of "ᾅδης". While the King James Version translated "ᾅδης" as "hell", except in this very verse of 1 Corinthians, where it uses "grave". Modern translations, for which there are only 10 instances of the word "ᾅδης" in the New Testament, generally transliterate the word, as "Hades".

In all appearances but one, "ᾅδης" has little if any relation to afterlife rewards or punishments. The one exception is Luke's parable of Lazarus and the rich man, in which the rich man finds himself, after death, in Hades, and "in anguish in this flame", while in contrast the angels take Lazarus to "the bosom of Abraham", described as a state of comfort.

Death and Hades are repeatedly associated in the Book of Revelation. The word "Hades" appears in Jesus' promise to Peter: "And I also say unto thee, that thou art Peter, and upon this rock I will build my church; and the gates of Hades shall not prevail against it" (Matthew 4:18), and in the warning to Capernaum: "And thou, Capernaum, shalt thou be exalted unto heaven? thou shalt go down unto Hades." (Matthew 11:23)

Now what about Christ descending in to Hades? Let's look in to that too!

Several passages from the Old and New Testament

teach that Christ descended into Hades, the realm of the dead before the Ascension. These include: 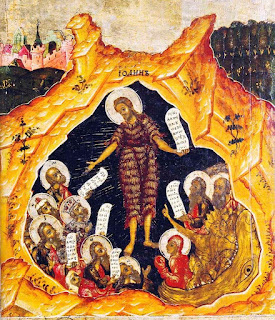 According to the apocryphal The Gospel Of Nicodemus

The Harrowing of Hades was taught by theologians of the early church. Here are just a few examples from the first few hundred years of Christianity:
If you believe in the Bible, you have to believe in Hades and Christ's descent into Hades. But maybe none of this means anything to the worldly men of man-made, watered down, pseudo-religion made by man for man in the name of Christ, but truly is only made to fit in to the world and to this age?