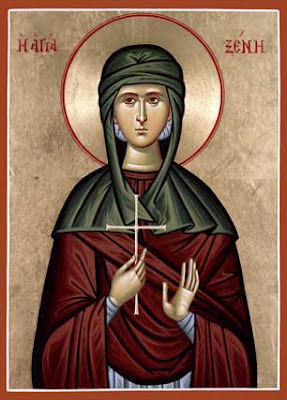 Saint Xenia (ξενία) the Righteous Deaconess of Rome was a saint of 5th century, honored by the Orthodox, Roman Catholic, and Anglican Churches. St. Xenia of Rome was born with the name Eusebia; she grew up in a distinguished family. While her parents were preparing to wed her in an arranged marriage, she stole away secretly, taking two handmaids with her.

She traveled to the island of Kos in the Aegean Sea, where she was given the name “Xenia” and eventually became a deaconess revered for having the power to heal. She was ordained deaconess by Presbyter (priest) Paul, her spiritual father, who became Bishop of Mylasa and Karia in Asia Minor. Although she was originally named Eusebia, to conceal her identity, she took the name Xenia which means “stranger” in Greek because of her estrangement from her home-country.

Saint Xenia often stood all night in prayer, fasted, and humbled herself before God and others. She was a shining light to all and followed her Saviour in meekness and humility. Of her is written that she “helped everyone: for the destitute, she was a benefactress; for the grief-stricken, a comforter; for sinners, a guide to repentance. She possessed a deep humility, accounting herself the worst and most sinful of all“.

She lived out her life uniting herself to Christ in body, word, and thought. When it was her time to leave this earthly life in AD 450, she gave her bright soul into the hands of Christ, Who brought this pure dove into His Never-Ending Kingdom. At the time of her death, a brilliant cross brighter than the sun appeared over her monastery wreathed in a circle of stars, showing her life was pleasing to God.

She is said to have foreseen her own death; at the island of Kos in the Aegean Sea she completed her ascetic life. The Feast of Saint Xenia is celebrated in the Orthodox Church on January 24, the day on which she died.