Saint Boniface on the Aerial Toll Houses After Death 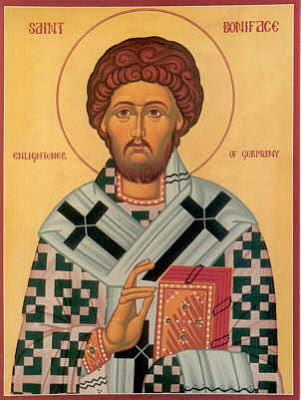 Saint Boniface, the 8th century Anglo-Saxon Apostle to the Germans, relates in one of his letters the account given to him personally by a monk of the monastery at Wenlock who died and came back to life after some hours.


"Angels of such pure splendor bore him up as he came forth from the body that he could not bear to gaze upon them.... 'They carried me up.' he said, 'high into the air ...' He reported further that in the space of time while he was out of the body, a greater multitude of souls left their bodies and gathered in the place where he was than he had thought to form the whole race of mankind on earth. He said also that there was a crowd of evil spirits and a glorious choir of higher angels. And he said  that the wretched spirits and the holy angels had a violent dispute concerning the souls  that had come forth from their bodies, the demons bringing charges against them and aggravating the burden of their sins, the angels lightening the burden and making excuses for them."

"He heard all his own sins, which he had committed from his youth on and had failed to confess or had forgotten or had not recognized as sins, crying out against him, each in its own voice, and accusing him grievously.... Everything he had done in all the days of his life and had neglected to confess and many which he had not known to be sinful, all these were now shouted at him in terrifying words. In the same way the evil spirits, chiming in with the vices, accusing and bearing witness, naming the very times and places, brought proofs of his evil deeds.... And so, with his sins all piled up and reckoned out, those ancient enemies declared him guilty and unquestionably subject to their jurisdiction."

"'On the other hand.' he said, 'the poor little virtues which I had displayed unworthily and imperfectly spoke out in my defense.... And those angelic spirits in their boundless love defended and supported me, while the virtues, greatly magnified as they were, seemed to me far greater and more excellent than could ever have been practiced by my own strength.'"

From The Letters Of Saint Boniface