The Repose of St. John the Theologian according to the testimony of St. Prochorus, his disciple and one of the original seven deacons of the Church 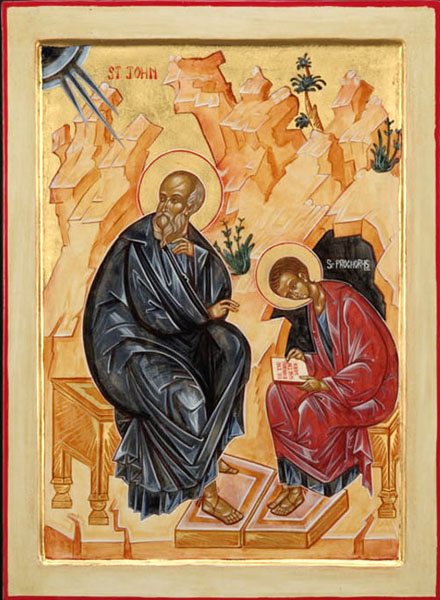 In our first visit to Ephesus, we were there for nine years, and then spent fifteen years of exile in Patmos. After twenty-six years had passed from the time we came from Patmos to Ephesus again, John came out of the house of Domnus and assembled seven of his disciples – myself and six others – and said to us: “Take spades in your hands and follow me.”

So we did as we were instructed and followed him outside the city to a certain place, where he said: “Sit down.” He then went a little apart from us to where it was quiet and began to pray. It was very early in the morning; the sun had not quite risen. After his prayer he said to us: “Dig with your spade a cross-shaped trench as long as I am tall.” So we did it while he prayed. After he had finished his prayer, he laid himself in the trench we had dug, and then said to me: “Prochorus my son, you will go to Jerusalem. That is where you must end your life.” He then gave us instructions and embraced us, saying: “Take some earth, my mother earth, and cover me.” So we embraced again, and taking some earth, covered him only up to his knees. Once more, he embraced us, saying: “Take some more earth and cover me to the neck.” So we embraced him again and took some more earth and covered him up to the neck. Then he said to us: “Bring a thin veil and place it on my face, and embrace me again for the last time, for you shall not see me anymore in this life.” So we embraced the apostle again, grief-stricken.

We then returned to the city and were asked: “Where is our teacher?” So we explained what had just occurred in great detail. They begged us that we show them the site. Therefore, we went back to the grave with the brethren, but John was not there. Only his shoes were left behind. Then we remembered the words of the Lord to the Apostle Peter: “If I will that he tarry until I come, what is that to you?” And we all glorified God, the Father, and the Son, and the Holy Spirit, to Whom is due glory, honor, and worship, unto the ages of ages. Amen.