My 2nd Novel, "Vhaidra & the DRAGON of Temple Mount" is NOW Available! 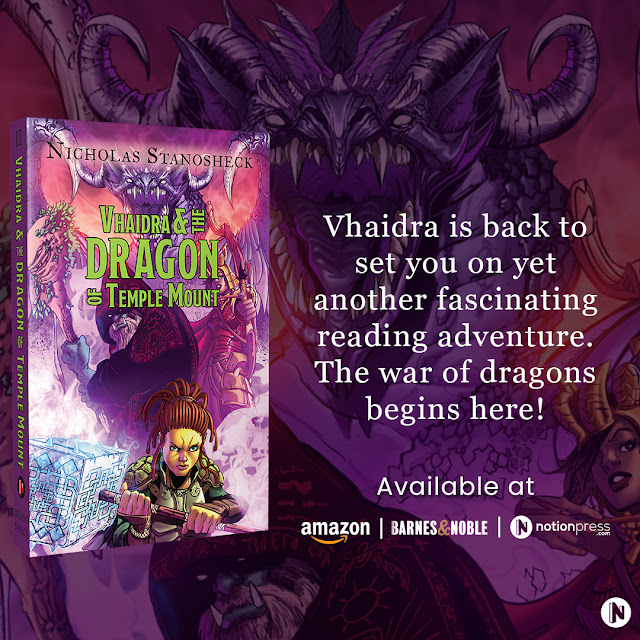 Many of you know that besides blogging here at the Orthodox Scouter, I am also top-selling author of epic fantasy fiction novels. My first novel, Vhaidra & the DESTINY of Nikodemos was a top-seller at Barnes & Noble, was a HPB Pick at Half-Price Books, and sold well at Amazon and more than 50 bookstores across the USA and in more than 20 countries.

Today, I wanted to share that yesterday I released my second novel in THE VHAIDRA SAGA, a sequel to Vhaidra and the DESTINY of Nikodemos that is titled, Vhaidra and the DRAGON of Temple Mount. This novel takes the characters through many years of peace followed by the beginning of some very big troubles. Here is the back cover blurb for it.

The War of the Dragons begins here...

What secrets lie in Sicyon's mysterious Temple Mount? Who are ATHIE, DAMIANOS, and KOSMAS, and what is their connection to the orphaned half-dragon MIKHAIL? Are the forces that are purportedly working for a better tomorrow in Sicyon truly what they say they are?

After the devastating Battle of Sicyon in “Vhaidra & the DESTINY of Nikodemos,” House Iroas ascends as VHAIDRA the dark elf monk and NIKODEMOS the human cleric raise a powerful house of half-drow warriors in the overworld. Meanwhile, the young half-dragon, MIKHAIL, his human milkmaid and astonishing ranger, MIRIAM, and the flirtatious dwelf dancer, TI'ERRA, change the ascetic half-orc wizard, ELDER DIONYSIOS, forever, as his hidden history intersects with his future, whether he likes it or not.

The obsidian half-dragon grows from a baby to Sicyon’s powerful stylite and protector, but will his abilities be enough to stave off both the imminent threat of the mighty white dragon from the north or will Sicyon get a long cold winter that it can never wake from? Will the diabolical forces within Sicyon that conspire against ARCHON JUSTINIAN and his allies be able to exploit VHAIDRA, NIKODEMOS, TI'ERRA, ELDER DIONYSIOS, MIRIAM, and MIKHAIL to create the civil war that they so desire? Find out the answers to these questions and more in the exciting adventures of Vhaidra & the DRAGON of Temple Mount!

It is currently available for purchase at Amazon, Barnes & Noble, and eBay, and will be in many more bookstores very soon. It is already getting 5-star reviews, and like my previous novels it has been enjoyed by people of all ages and people who never had read fantasy novels before.