The Teachings of the Holy Orthodox Church has Finally Been Completed! 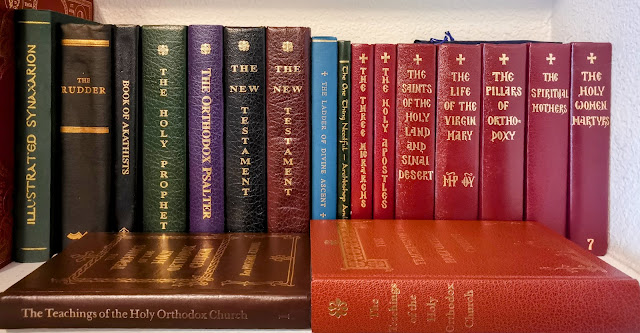 Back in 1986, The Reverend Father Michael Azkoul, Ph.D. wrote The Teachings of the Holy Orthodox Church: Volume 1: God, Creation, Old Israel, Christ in 236 pages, which was edited by Hieromonk Gregory of Dormition Skete with the blessing of His Grace, ROCOR (Russian Orthodox Church Outside Russia) Bishop Alypy of Cleveland. Save for its attacks on Blessed Augustine of Hippo, the author of The City of God, it is a good book that does a really good job of explaining the typology of the Old Testament revealed in the New Testament's Holy Gospels, Acts, Epistles, and Revelation, and I hoped to see Volume 2: The Church and Volume 3: Mystagogy of The Teachings of the Holy Orthodox Church in the future. Volume 1's five chapters are:
The second and third books were not to be, as Father Michael Azkoul broke away from the ROCOR and joined the HOCNA (Holy Orthodox Church of North America) while then-Archimandrite Gregory (Gregory Abu Assaly) later departed ROCOR for one of the GOCs (Genuine Greek Orthodox Churches). Interestingly, Father Michael Azkoul in now in one of the GOCs that Archimandrite Gregory was formerly a member of, and now-Archbishop Gregory is the head of his own GOCA (Genuine Orthodox Church of America).
In 2020, Archbishop Gregory completed the volumes of The Teachings of the Holy Orthodox Church in 602 pages, making it into one book, making a re-edited, reformatted, and revised Part 1 while also adding a Part 2, the later of which consisted of what would have been Volume 2 and Volume 3 in Father Michael Azkoul's original plan. Volume 1 has now been renamed Part 1: God, Creation, and the Economy of Salvation. The chapters to Part 2: The Church are:
While the unfortunate attacks on Blessed Augustine of Hippo (commemorated 15 June in the Orthodox Church) remain, besides this, this is a very good book that is a good introduction to Orthodoxy, even better than the far more-errant introductory two volume set, The Orthodox Church and The Orthodox Way, by the then-layman Timothy Ware, now Metropolitan Kallistos (Ware).