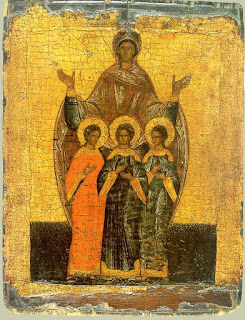 In the Eastern Orthodox Church the feast of these saints is kept on 17 September.

Although earlier editions of the Roman Martyrology commemorated Saints Faith, Hope and Charity on 1 August and their mother Sophia on 30 September,[1] the present text of this official but professedly incomplete catalogue of saints of the Roman Catholic Church has no feast dedicated to the three saints or their mother: the only Sophia included is an early Christian virgin martyr of Picenum in Italy, commemorated with her companion Vissia on 12 April; another early Christian martyr, Saint Faith (Fides), of Aquitania, France (Latin: Sancta Fides, French: Sainte Foy, Spanish: Santa Fe, Chinese: Shèng Fēi/圣飞), celebrated on 6 October, a Saint Hope (Spes), an abbot of Nursia who died in about 517, is commemorated on 23 May, and no saint Charity (Caritas) is included, although saints with somewhat similar names, Carissa and Carissima, are given, respectively under 16 April and 7 September.[2]

Accurate historical data about the saints is minimal. The cult is very ancient, and the names are found not only in the various early martyrologies of the Western Church, but also in the Menaia and Menologies of the Ancient Greeks. In the preserved documents, there are two groups of references. On the one hand, they mention a band of martyrs, mother and daughters, whose names are always given in Greek, and who are buried on the Aurelian Way. On the other hand, the documents speak of four martyrs, interred on the Via Appia, whose relationship is not indicated and whose names, though the same as those of the martyrs of the Aurelian Way, are yet always given in Latin. This can be interpreted as pointing to distinct groups.

Setting aside the clearly legendary accounts that have come down to us (see Migne, P.G. CXV, 497; Mombritius, Vitae Sanctorum, II, 204), the stories go as follows. In the reign of Roman Emperor Hadrian (2nd century AD), a matron Sophia (Wisdom), with her three youthful daughters, Pistis, Elpis, and Agape (Greek for Faith, Hope and Charity), became Catholic martyrs, and all three were interred on the Aurelian Way. Their tomb in a crypt beneath the church afterwards erected to Saint Pancratius was long a place of resort for pilgrims, as detailed in various documents of the seventh century, such as an Itinerarium (or guide to the holy places of Rome compiled for the use of pilgrims) still preserved at Salzburg, the list, preserved in the cathedral archives of Monza, of the oils gathered from the tombs of the martyrs and sent to Queen Theodelinda in the time of Gregory the Great, etc.

Later surely than the reign of Hadrian, but at what time is uncertain, a presumably separate band of martyrs, Sapientia (Wisdom) and her three companions, Spes, Fides and Caritas (Latin for Hope, Faith and Charity), suffered death and were buried near the tomb of St Cecilia in the cemetery of St. Callistus on the Appian Way.

The coincidence in names can be explained by the fact that the early Christians often (according to Italian archaeologist Giovanni Battista De Rossi) took in baptism mystical names indicative of Christian virtues, etc. Thus Sophia, Sapientia, Fides and the like are common names in early Christian inscriptions and martyrologies.

Saint Sophia the Martyr (d. 137 AD) is venerated in the Eastern Orthodox Church on September 17. Born in Italy, Sophia had three daughters: Faith (age 12), Hope (age 10) and Love (age 9), who were named after virtues mentioned by Saint Paul in 1 Corinthians 13.

They are said to have been martyred during the reign of Hadrian (117-138). The guards took Sophia's daughters one by one, from the eldest to the youngest and beat and tortured them to death. Sophia buried her daughters' bodies and remained by their graves for three days until she died herself.

In the year 777 their relics were interred at El'zasa, in the church of Esho.

There is a common misconception that the capital city of Bulgaria, Sofia, is named after Saint Sophia the Martyr, and so the city's holiday is on September 17. Sofia is in fact named after its ancient cathedral church of Saint Sophia, consecrated not to the early Christian martyr but to the Divine Wisdom of God (Aghia Sophia in Greek). There are several icons of St. Sophia the Martyr and her daughters in that church, though.


Troparion of St. Sophia and her 3 daughters (Tone 5):
Thou didst blossom in the courts of the Lord as a fruitful olive tree, O holy Martyr Sophia; in thy contest thou didst offer to Christ the sweet fruit of thy womb, Love, Hope and Faith. With them intercede for us all.
References:
[1]Catholic Encyclopedia