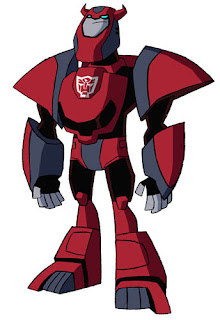 In my youth, I was quite a Transformers fan. My first Transformer was Ironhide, so just like my first Masters of the Universe toy, Mer-Man, he will always be a favorite. I would go on to collect many more Transformers. I bought most of the mini-bots, and although Bumblebee was most people's favorite, I preferred Cliffjumper and Cosmos. I did actually like Goldbug, when Bumblebee was upgraded, however. Sunstreaker, Inferno, Wreck-Gar, Slag, Bluestreak, Kup, the Insecticons, all the Predacons that combined to form Predaking and the biggest Transformer of them all (before Unicron), Omega Supreme! I remember seeing the original animated Transformers Movie as a kid and almost crying when Ironhide died in it! A

As I grew older I sold my Transformers, only ever buying my daughter a Transformers: Robots in Disguise Scourge, the evil clone of Optimus Prime and a Black Arachnia from Transformers: Beast Wars figure. I was never a huge fan of Optimus, always liking Ultra Magnus better, for some reason. I did not like the live action movie forms for the characters, I think the original forms would have been better. 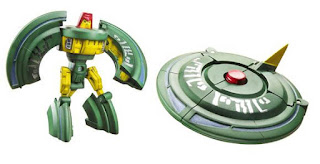 Anyway, at work we have been trying to decide on my team's name, other that the appointed names of "The Sales Farm Team" and "Team Stanosheck", as we wanted to have visual representations of ourselves like the other sales teams (i.e. Trent's Titans, Hurt's Heroes, etc.), so we are going with the "Stanfarmers" blending my last name with "Farm" and using great pictures of the newest Animated Transformers (in Cybertronian forms) to represent ourselves. Per my team's choices, I will not be Ironhide, but Omega Supreme the Big Boss!

Email ThisBlogThis!Share to TwitterShare to FacebookShare to Pinterest
Labels: 2011, The World, work