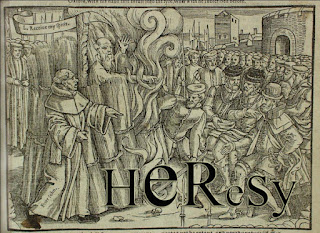 I know that I was guilty of this when I was a neophyte too, so please forgive my condemnation of my previous wrong actions. But since I did it, let me apologize to everyone for doing this.

Recently I have noticed a lot of new Orthodox Christians who pontificate on the web, whether by blog, by Facebook, by Twitter, or by Google+. These new converts, who have not even let the chrism dry yet are out  pontificating to the rest of the Orthodox world what they should believe.

I know they have good intentions, and many times they are right. But too many times, I see them supporting heterodox or straight out heretical stands. It comes from the baggage they bring from their previous denomination(s)/religion(s). Sometimes it is just them attacking their old denomination(s)/religion(s) mercilessly without ever instead talking about what they gained in converting to the True Faith.

The heterodox or heretical or just plain wrong baggage is leading others the wrong way, making others think this newbie is actually preaching Orthodox Dogma. Whether they are Zionists, Judaizers, Ecumenists, Universalists, or what have you, they should not be teaching others.

Again, I did this as a young convert, and it was wrong, so I apologize. New converts, please realize that Orthodoxy is a deeper and much older religion than any other new denomination you may have come from and it is going to take you years to learn not only the teachings but the Spirit of the Faith. Orthodoxy and Orthodopraxis are both important, but both have to be lived with the right attitude, spirit, and with love.

Let me point to a few of these issue:

ZIONISTS
No matter what your experience was as a Protestant in Israel, the government of "Israel" does not like Christians nor treats Christians well. Before this new nation-state of Israel was created, Christians had a pretty decent life in the Holy Land. Now Orthodox Christians are oppressed Palestinians who have their homes stolen from them. Don't be supporting them, they don't support you. They pretend to support Protestant Zionists, because it helps them as those Evangelists petition the U.S. Government and get this "Israel" U.S. Taxpayers' money.

JUDAIZERS
The Apostolic Council of Jerusalem (Acts 15), which taught us how Church disagreements are handled decided that the Jewish Law was null and void, because it had been fulfilled in Christ. We did not continue going to the temple, and set up our own Fasting and Feast Days. See Didache.

UNIVERSALISTS
We can hope that God in His Infinite Mercy saves all people, but we also know many people would not even want this. Just because you hope something, does not make this a teaching of the church. People go to Hades when they die and have the first judgement. The final judgement is when people end up at their final destination, so one cannot declare that someone is in Heaven or Hell unless that has been so proclaimed by the Church who was given they keys by Christ via the apostles, the first holders of the bishopric.