On August 29, 2012, His Eminence Metropolitan Methodios of Boston, who represented His Eminence Archbishop Demetrios of America on behalf of the Greek Orthodox Archdiocese, offered the Orthodox Christian prayer at the Republican National Convention in Tampa, FL. The prayer was offered immediately following the acceptance speech of vice presidential nominee Paul Ryan. Originally, the Archbishop was scheduled to offer the benediction but was unable to do so due to his travel to the Ecumenical Patriarchate in Constantinople.

Metropolitan Methodios also met with several officials of the Republican Party including the Greek Orthodox Chairman of the RNC Reince Priebus, who is a member of the Order of Saint Andrew the Apostle, Archon of the Ecumenical Patriarchate in America. 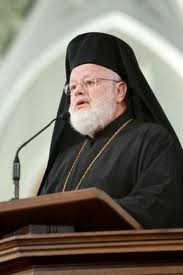 Below is the prayer offered at this evening's Republican National Convention:

"O Heavenly King, Comforter, the Spirit of truth Who is ever present and fills all things, the Treasure of all blessings and source of life, we beseech you to dwell in our hearts" as we hold in prayer our brethren who suffer the ravages of Hurricane Isaac. Embrace them in your love and keep them safe. Enable us to reach out to them in acts of philanthropy and generosity.

As we close this evening's program, we pray that You bless and inspire the delegates of this Republican Convention to be your devoted servants and dedicated citizens of our great country. They have nominated two of your faithful sons, Mitt Romney and Paul Ryan, to serve the highest offices of this beloved land, a nation which has always opened its embrace to welcome "the tired, the poor and the huddled masses, all the tempest tossed to breathe free" a nation that has always been a model of peace, justice and the rule of law. Shine in the hearts of the nominees of this convention the radiant light of Your divine will. Imbue them and Chairman Reince Priebus, Archon of the Ecumenical Patriarchate with insight, wisdom, and boldness, with courage, compassion and competence.

Tonight, we remember the intrepid members of our armed forces who place themselves in harm's way in defense of our freedom, and like our Founding Fathers, are steadfast in keeping America the Land of the Free and the Home of the Brave.

May every American be more sensitive:


Help us, Lord, to break down the walls of enmity and distrust, and show us the way to a new era of peace, equality and opportunity. Strengthen the hand of America as it reaches out to clasp the hands of our brethren throughout the world to build bridges of understanding. May we rediscover the path that leads one to another, and all to You.

His Eminence Metropolitan Nicholas of Detroit, representing Archbishop Demetrios of America delivered today, shortly after 5 p.m. (EDT), the invocation at the official opening of the Democratic National Convention in Charlotte, NC. Originally, Archbishop Demetrios was scheduled to offer the opening prayer, at the invitation of President Barack Obama, but was unable to do so due to his travel schedule.

While in Charlotte, Metropolitan Nicholas met with several officials of the Democratic Party. 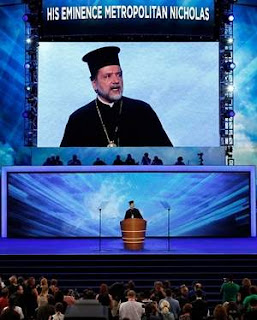 The text of the uplifting prayer as delivered by Metropolitan Nicholas follows:


+O God most pure and Author of all creation;
As you spoke to us of old,
Speak to our hearts anew;

You who had fellowship with Abraham and Sarah,
Come and stay in our midst;

As You led your people through the wilderness,
Lead us now, as the Democratic National Convention opens its deliberations
for the benefit of the people and the land of these United States;

You have brought us here from every place on earth, that Native Americans and Immigrant Americans, People of Color and of every Tongue,
might find not just hope, but a land which seeks life, liberty and the pursuit of happiness.

Grant to all here a deep and abiding respect for the task at hand, so that our common efforts will perfect our desire that law and government be for, by and of the people.

Assist us to set aside personal differences, so that our unity of purpose will be rise above us all as an enduring symbol of freedom.

Let freedom reign in our hearts so that we would never fear to lead the oppressed to freedom; never fear to give shelter to the homeless and displaced; never fear to treat our neighbor as our selves; to give dignity and opportunity, as in Detroit and elsewhere in America, to the struggling unemployed and less fortunate brothers and sisters in this great land. Let us never be afraid.

While our prayers and assistance are with those affected by Hurricane Isaac, we trust in You, O Lord, that your gracious love will be with our President, Barack Obama, with our Vice-President, Joseph Biden; with all of our public officials and those who serve the good of this Nation.

We ask also that You preserve and protect those who stand in harm’s way, as they defend and serve for the benefit of all.

Come and be with us, O Mighty God, as fortress and deliverer, so that through You, and by the faithful and strong leadership of our government, we shall rejoice knowing that our children and our children’s children will know peace and every blessing.

To You be glory forever.
Amen.+

Personally, I think Metropolitan Methodios did a better job, as he not only talked about things the RNC agreed with, but some things that some in the RNC would not agree too. Metropolitan Nicholas' seemed to be more in line with what the DNC would want to hear. Politicians should be made to feel uncomfortable about wrong stances, IMO.