My Journey Through Orthodoxy 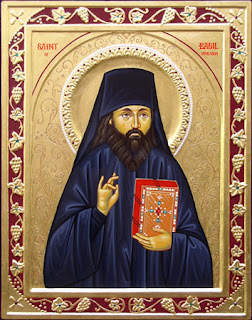 15 years ago, in 1996, my journey began. I was in my searching phase and found a small Ukrainian Orthodox Mission in Lincoln, Nebraska, named after Saint Nicholas of Myra in Lycia.

I did not fully understand it at the time, but this was a breakaway group called the Kiev Patriarchate

, in North America this Church was under (deposed ROCOR deacon) Lev Puhalo

. I just know I was told the other Orthodox churches in Lincoln were in error. The mission was in rented space and presided by a priest who lived in another city, named Father Romano Couch

. After time, they were unable to continue travelling to Lincoln, and they moved the mission to their home, where I was unable to go. So I returned to the church of my birth, the Roman Catholic Church, as I could see some of those ancient traditions, I learned of in an old version of The Orthodox Church by Timothy Ware

, were still being practiced.[1]

However, I was not spiritually fulfilled in Roman Catholicism. When I found out there was an Eastern Rite

of Roman Catholicism, that is where I went. I kept on studying the Church Fathers

and the Ecumenical Councils

. Eventually I had to make a decision. Would I follow the Church that kept all that the early Church had taught and practiced? It was obvious that only one Church kept these traditions, and being focused on tradition, there was only choice back in 2001: ROCOR

My traditionalism increased, fueled in part by my daughter's godmother, a member of the Genuine Greek Orthodox Church

. With the talks of ROCOR uniting with the Moscow Patriarchate, ROCOR split in to two, and the ROAC: The Russian Orthodox Autonomous Church, with its origins in the Catacomb Churches of Russia started gaining ground in America. In time, after a move to Colorado, I joined a ROAC parish, Saint Basil of Kineshma

In time, while studying via Suzdal Theological Academy, I became a deacon, and even after the temporary temple was abandoned, I kept going with Reader's Services.[2] 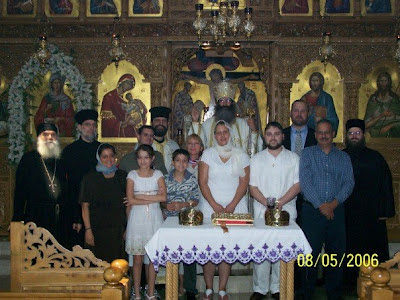 That is, until I ran afoul Bishop Andrei due to my unwillingness to neither be ordained a presbyter nor break my lease and move to a parish in another state. I became a retired deacon in 2007 and quit the ROAC, but was still could not do Reader's Services

, as this was an order from my last bishop, Andrei, and I had yet to find a new bishop to go under. So I prayed and prayed and prayed while many bishops offered to receive me, some even wanting to make me a presbyter.[3]

In between time I was without a church and being I was laity now, I got married, however it was secularly in China. In time, I moved to Pueblo. My work rarely gave me Sundays off, but when they did, I went to Saint Michael the Archangel

. It was a great parish and a properly focused priest, nonetheless. Meanwhile I continued to help the underground Chinese Orthodox Church

When I moved to Texas for a job opportunity, after long considering my options with fervent prayer, I eventually started visiting local Orthodox Churches. Saint John the Baptist Greek Orthodox Church

was one I went to, and my wife loved Vespers there, so we attended there for Vespers. The Divine Liturgy

Orthodox Church a little further away. While eventually I started to confess at Saint John's, it was a long time until we decided to join Saint Barbara's. We had our marriage blessed there and only after my son was Baptized there on his 100th day, I started to commune. The marriage blessing was something that was required before I could commune at either of the Texas parishes.

, he was accepted as a retired bishop with no teaching faculties, his clergy that came with him were accepted as laity. So that Saint Nicholas Ukrainian Orthodox Church

was to merge with Saint John of Krondstadt Orthodox Church in Lincoln.

[3]I dared to ask him why he re-Baptized a priest who had been ordained in the ROCOR before the ROAC broke from it. A priest who was later defrocked by the GOA for having an affair with a parishioner, then moving in with her. When Vicar Bishop Andrei baptized this priest, then re-Ordained him, this woman was his only parishioner, other than his son. The three of them lived in the same house, so no other TOC

would take him due to this, and after he later ran afoul of Bishop Andrei, (Bishop Andrei always has to have an enemy in his midst) no one still would until he found the always-accepting Milan Synod

willing, many, many, many years later. Bishop Andrei would end up running everyone out of the ROAC who was a member before he joined!

*Of note, at my ROCOR parish of Saint Nicholas of Myra in Lycia

, the younger Matushka said that people leave ROCOR for more traditional jurisdictions and keep going until they end up in the Matthewites, eventually leaving Orthodoxy altogether or ending up in the OCA, because it is "canonical

"! I scoffed that anyone born in the Old Calendar ROCOR would join the New Calendar OCA. Of course, at that time, I never thought that the ROCOR would unite with the Moscow Patriarchate and be in communion with the OCA and the rest of "World Orthodoxy

"! Thank God for His Mysterious Ways!