Patriarchs Speak Out Against Ecumenism 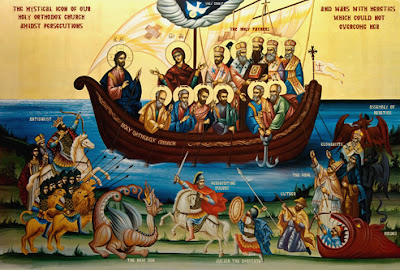 In Moscow, on June 28,2010, His Holiness Patriarch Kirill of Moscow and All Russia met with Dr Olav Fyske Tveit, the Secretary General of the World Council of Churches (WCC). His Holiness explained to Dr Tveit why Orthodox are alienated from the ecumenical organisation. Patriarch Kirill said that the WCC is in the midst of a protracted crisis, according to the MP official website.

Ecumenical dialogue, that is, communication and collaboration between the Orthodox Churches with Catholics and Protestants, causes concern and dissatisfaction amongst some Orthodox. Some of them are afraid that such cooperation will lead to a mechanical unification of churches. The consequence would be a falling away from the Truth of the Orthodox Church, and the True Church would only then be only a small handful of people. In any case, there are no longer ecumenists who defile the Church with involvement in joint prayer together with Catholics and Protestants. Nevertheless, some Orthodox do not understand why we need to cooperate with Catholics and Protestants. They point up that the ancient Church Fathers denounced heretics, rather than trying to find common ground with them on issues of morality.