Excerpt from the 7th Century Synodicon of the Church

As the Prophets beheld, 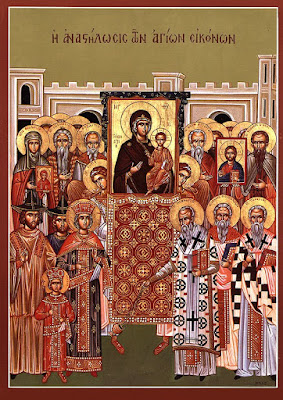 as the Apostles have taught,
as the Church has received,
as the Teachers have dogmatized,
as the universe has agreed,
as Grace has shown forth,
as Truth has revealed,
as falsehood has been dissolved,
as Wisdom has presented,
as Christ has awarded:

thus we declare,
thus we assert,
thus we preach Christ our true God,
and honor His Saints

in words,
in writings,
in thoughts,
in sacrifices,
in churches,
in Holy Icons;

on the one hand worshiping and reverencing Christ as God and Lord;
and on the other hand honoring as true servants of the same Lord of all,
and accordingly offering them veneration.

(as was written in the 7th century AD, before there were any "denominations", and was only the One Church, the Orthodox Christian Church.