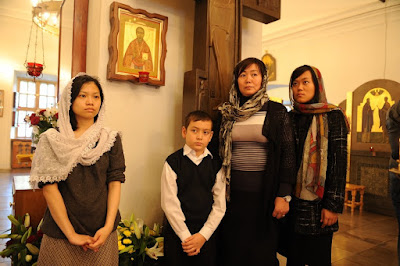 On September 21, 2011, the Nativity of Our Lady, Metropolitan Hilarion of Volokolamsk, head of the Moscow Patriarchate's department for external church relations, celebrated the Divine Liturgy in St. Nicholas's church of the Nativity of Our Lady at Golutvin, which is the Moscow representation of the Chinese Autonomous Orthodox Church, called Chinese Patriarchal Metochion.

Among the worshippers were benefactors of the St. Nicholas church. Some prayers were said in Chinese. After the liturgy there was a procession with the cross.


Greeting the DECR chairman on behalf of the church's clergy and parishioners, its rector, Archpriest Igor Zuev pointed to an essential progress made in the efforts to normalize the situation of the Chinese Autonomous Orthodox Church. "We as workers at the Chinese Metochion have still much to do and we are bitterly aware of our weakness. But we know that God's power is made perfect in weakness", he said.

In his archpastoral homily on the Nativity of Our Lady, Metropolitan Hilarion spoke about childbirth as a blessing of God. He stated with regret that childbirth ceased to be a priority for married couples in our country today as they give priority now to material welfare. "With this attitude it is difficult to expect our people to prosper and our population to grow. It happens because the scale of values upheld by people today does not correspond to God's commandments", he said.

Addressing the rector of the church, Metropolitan Hilarion expressed the wish that the number of parishioners of not only Russian but also Chinese background grew "because it is the only church in Moscow to celebrate partly in Chinese", he said.


He also pointed to a certain progress made in the Russian Church's cooperation with the Chinese authorities in the efforts to normalize the life of Orthodox believers in China. "We do not advance with seven-league strides of course but with small steps. Recently we have been promised that two students will come from China for training in our theological schools, so that they may become priests and service in China", he said.

"May this church of St. Nicholas serve as a bridge between the Russian Orthodox Church and its daughter, the Chinese Autonomous Orthodox Church", he said in conclusion.

Established by the Holy Synod, the Russian Church Mission had worked in China since 1713. In the early 20th century it considerably extended its activity to open representations in Harbin, in Dalny urban settlement in Chukotka, at the Manchuria station of the Chinese Eastern Railway, and finally in St. Petersburg and Moscow.

The Moscow Representation of the Russian Church Mission in China was established in 1908. In 1922 the Representation's church was sealed up. In 1978 a part of the building was demolished and in 1990 the church's area became a waste ground.

In 2011, Patriarch Kirill decreed that a Chinese Patriarchal Methochion be established at the St. Nicholas church at Golutvin.