My 15 Favorite Spiritual Books That I Own and Read 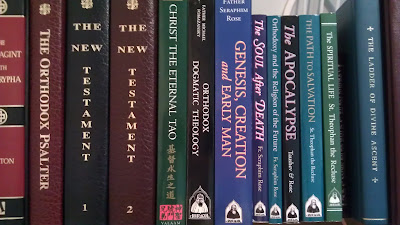 Tonight I was rearranging my books, putting my favorites and most reread books together in a special place. They numbered 15 and I thought this list would make for a great blog post with links to buy them for yourselves. If you do not have these books, I highly recommend you get them all and read them then reread them as quickly as possible!
A wide array of authors in this mix with Greeks, Arabs, Russians, Serbians, British, Asians, and Americans; including both still-living and recently deceased clergymen of blessed memory, to modern and ancient saints. Obviously there are no books in my library by those of the Parisian School of Modernism and Ecumenism such as Protopresbyter John Meyendorff, Protopresbyter Thomas Hopko, Metropolitan Bishop Anthony Bloom of Sourozh, Protopresbyer Alexander Schmemann, or deposed deacon Lev Puhalo, who tend to water down the faith with questioning and Western scholasticism rather than understanding and believing then explaining the foundations of the Church Fathers built on the Rock of Christ.