My (Continuing) Journey Through Orthodoxy 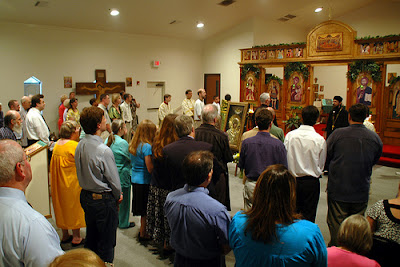 At the beginning of this year I blogged about my 15 years through and to Orthodox Christianity. I ended that blog post with this paragraph:


"When I moved to Texas, after long considering my options with fervent prayer, I eventually started visiting local Orthodox Churches. Saint John the Baptist Greek Orthodox Church was one I went to, and my wife loved Vespers there, so we attended there for Vespers. The Divine Liturgy there was not to my liking, and thankfully we also had Saint Barbara Orthodox Church a little further away. While eventually I started to confess at Saint John's, it was a long time until we decided to join Saint Barbara's. We had our marriage blessed there and only after my son was Baptized there on his 100th day, I started to commune. The marriage blessing was something that was required before I could commune at either of the Texas parishes."

I wanted to dig into the life of my new parishes in more depth as we get to the end of the Gregorian Calendar year.

I started the year going to Vespers alone every Saturday night, eventually taking Daniel with me. In time, my wife did not need to rest during that time and started coming too. As I stated once before, my wife likes the Byzantine style chant better than Russian 4-part harmony. She also likes that it is closer to our home. In time, I have gotten more accustomed to the chanting and can chant along to some of it. After Vespers, Confession is available with the Presbyter from Romania, Father Vasile.

During this time, I also found out that Saint John's has 6:00am Divine Liturgy on every major and many minor feast days, so I am able to attend Divine Liturgy before work and do not have to contemplate using vacation to go to Church! Saint Barbara's does like most parishes and hold Feast Day Divine Liturgies at the usual time of 10:00am. Sometimes it is only the yia-yias (older pious ladies), the readers, servers, chanters, and myself, but I love it all the same.

However it all works out, in truth, both parishes are equally spiritual homes for my family and I that we love very much.

UPDATE: My story continues at http://orthodoxscouter.blogspot.com/2012/07/my-continuous-journey-through-orthodoxy.html