The system is beyond broken. Some teams in the top 10 are not even in a bowl game this year (like #5 Southern Cal)! Everyone, including the President of the United States of America, Barack Obama agrees, it is time for a playoff system in NCAA College 1-A American Football.

Here is an easy solution using the classic bowls in their historical ranks without letting the Fiesta Bowl trump the Cotton Bowl which was a stupid decision based on money, just like all college football decisions these days.

There are currently 12 Division 1-A conferences (ACC, Big 12, Big East, Big 10, Conference USA, IA Independents, Mid-American, Mountain West, Pac-10, SEC, Sun Belt, WAC), so I would recommend allowing for 4 wild cards to make a Super 16 for a proper playoff system. Here is how I would do it (without naming which conference plays where, because that does not really even matter. Let the conferences decide a rival conference for the system just like teams have conferences (i.e. Big 10 is the rival conference of the Big 12).

The winners of these two Western Bowl Games (Rose Bowl and Cotton Bowl) meet in the BCS West Bowl Game. (Maybe play it in Memorial Stadium in Lincoln, NE and call it the Corn Bowl or the Cereal Bowl).

Now for the Eastern Bowls: 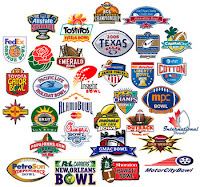 The winners of these two Eastern Bowl Games (Orange Bowl and Sugar Bowl) meet in the BCS East Bowl Game (Maybe play it in Lambeau Field/City Stadium in Green Bay, WI and call it the Cheese Bowl or the Chili Bowl).

The winners of the BCS West Bowl and the BCS East Bowl meet in the National Bowl Game/BCS Championship Bowl Game in a fitting location such as either New York, New York or Washington, D.C..

All the games before the semi-finals and the Championship game are in more temperate southern states with San Francisco being the northernmost bowl, so it makes sense to have the semi-finals and Championship game in the colder, windier north in non-domed stadiums in major football cities for a different feel.You could still have all those other minor corporate bowl games for the teams ranked #17 to #120 with the opponents based solely on how much money they will get by inviting certain teams, just like now. There, this is the BCS fixed. How hard was that?