The Holy Theophany of Our Lord, God, and Saviour Jesus Christ 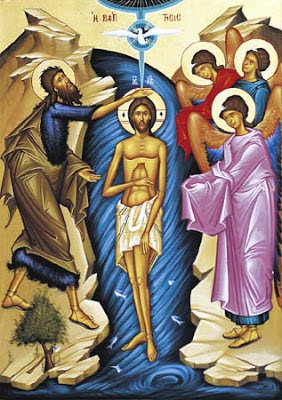 Theophany denotes the feast whereby through the Baptism of the Lord, the Most Holy Trinity has been revealed to the world (Matthew 3:13-17; Mark 1:9-11; Luke 3:21-22). God the Father spoke from Heaven about the Son, the Son was baptized by the Forerunner Saint John, and the Holy Spirit descended upon the Son in the form of a dove. From ancient times this feast was called "The Day of Illumination" and "The Feast of Lights", since God is Light and has appeared to illumine "those sitting in darkness and the shadow of death" (Matthew 4:16) and to save through grace the fallen race of mankind.

In the ancient church it was the custom to Baptize catechumens during the Vespers of Theophany , so that Baptism also is revealed as "a spiritual illumination". The Feast of Theophany dates back to Apostolic times. Mention is made concerning it in the Apostolic Decretals. A testimony of Saint Clement of Alexandria has been preserved from the 2nd century concerning the celebration of the Baptism of the Lord and performing the night Vigil before this Feast.

In the 3rd century mention was made of the Feast of Theophany in the dialogue concerning the Divine Services between Martyr Hippolytus and Saint Gregory the Wonderworker. In the following centuries — from the 4th to the 9th centuries — all the great Fathers of the Church — Saint Gregory the Theologian, Saint John Chrysostom, Saint Ambrose of Milan, Saint John Damascene — composed theor own commentaries on the Feast of Theophany. Saints Joseph the Studite and Theophanes composed much liturgical music for this feastday, which even now is sung for Divine Services. Saint John Damascene said the Lord was baptized not because He Himself had need of cleansing, but so that "by water to bury human sin", to fulfill the law, to reveal the Mystery of the Holy Trinity, and finally, to sanctify "the nature of water" and to offer us the form and example of Baptism.

On the Feastday of the Baptism of Christ, the Holy Church assets our faith in the Mystery of the Three Persons of the One God. It teaches us to confess and glorify as equally-honored the Holy Trinity One in Essence and Undivided. It exposes and destroys the fallacies if the ancient false teachings, which attempted through human reasoning to explain the Creator of the world.

The Church shows the necessity of Baptism for believers in Christ, and it inspires in us a deep sense of gratitude for the Illumination and Purification of our sinful nature. The Church teaches that our salvation and cleansing from sin is possible only by the power of the grace of the Holy Spirit, which is why it is necessary to preserve worthily these gifts of the grace of holy Baptism and to preserve spotless this priceless garb, about which the feast of the Baptism tells us: "As many as have been baptized into Christ, have put on Christ" (Galatians 3:27)