Saints Olga the Empress & Vladimir the Prince, and the Baptism of Rus' 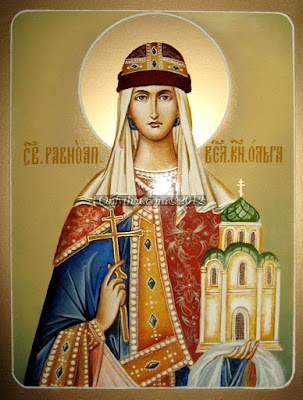 In 957, Saint Olga visited Emperor Constantine VII in Constantinople. He admired her looks and intelligence, noting to her that 'You are fit to reign in this city with us.' She agreed to be Baptized and thus became a Christian, with name Helen, after the Patriarch Polyeuctus had instructed her in the faith. Before her Baptism, Constantine asked her hand in marriage, but Olga deferred claiming that she wanted to be Baptised an Orthodox Christian first. Again, after the Baptism, Constantine requested her hand in marriage, but the quick-thinking Olga tricked him (since he was her Godfather in Baptism), noting that he called her his daughter in Baptism and so such a union is forbidden under Christian law. While Constantine commented to Olga about her trickery, he lavished gifts on her when she returned to Kiev. In Kiev she instructed her son, Svyatoslav, and entreated him to be baptized. While he could not bring himself to commit to Baptism, he would not forbid others.

In 968, while Svyatoslav was occupied elsewhere, Pechenegs surrounded Kiev in a siege where Olga was living, caring for her grandsons Yaropolk, Oleg, and Vladimir. As the people became weaker with hunger and lack of water, Olga inspired a lad to escape the siege and bring relief. By this time sickness had come upon the aging Princess Olga. At the same time her son wanted to move his residence to Pereyaslav on the Danube River, leaving Olga in Kiev. Olga restrained Svyatoslav from leaving until after she had died. She died on July 11, 969 and was buried by a priest, having ordered that there would not be a funeral feast.

While Olga was not successful in converting her son or many others to the Christian faith, her example may have been a great influence on her grandson, Vladimir, who in 988 became an Orthodox Christian and led the inhabitants of Kiev and Rus' to follow him in the Baptism of Rus'. For her leadership in bringing Christianity to Russia, she is considered the first saint of the Russian Orthodox Church.

Introduction of Christianity into the lands of the Slavs began at least a century before the great event in Kiev. Traditionally, the missionary brothers Saints Cyril & Methodius are credited with bringing Orthodox Christianity to the Slavs, in their own language, in the 860s, although the southern Slavs had already known Christianity thanks to Saint Andrew the Apostle. Among the eastern Slavs, whose ruling princes, the Rus, were descended from the Varangian (Norse) chieftains/traders, introduction of Christianity appears to have occurred in several stages.

As early as 867, Patriarch Photius of Constantinople advised the other Orthodox Patriarchs that members of the Rus, who had been baptized by his bishops, had become enthusiastic Christians. As the Primary Chronicle and other sources noted the Rus of the ninth century remained staunch pagans, and the outcome of the missionary efforts of Photius’ bishops is not clear. Constantine VII and later Byzantine historians, including John Skylitzes and John Zonaras, continued to maintain a story of Christianization of the Rus, including enumeration of Orthodox Sees among the Rus.

The Primary Chronicle notes that a sizable part of the population of Kiev was Christian in the mid tenth century although noting the ruling princes continued following pagan customs. The Chronicle describes the actions in the mid tenth century of the ruling regent of Kiev, Princess Olga of Kiev, who visited Constantinople with a Priest Gregory. While it is unclear when and where she was Baptized, she became an Orthodox Christian and attempted to convert her son, Svyatoslav. But, he remained a stubborn pagan to his death in 972. His son and successor, Yaropolk I, appeared to be conciliatory towards Christianity and may have entertained visiting Christian missionaries.

After Yaropolk’s death in 980 and the ascension of his brother Vladimir as the ruling prince, Vladimir led a pagan reaction to Christianization efforts. This revitalization of pagan worship failed, however. By the mid 980s Vladimir realized the need to adopt the true religion. In 987, as reported in the Primary Chronicle, and after consulting with his boyars (knights), Vladimir dispatched envoys to study the religions of neighboring nations. Upon returning, the envoys reported their impressions, noting their objections to the religions of the Muslims, Jews, and German Christianity, while expressing the joy of the festive ritual in the cathedral Hagia Sophia in Constantinople. 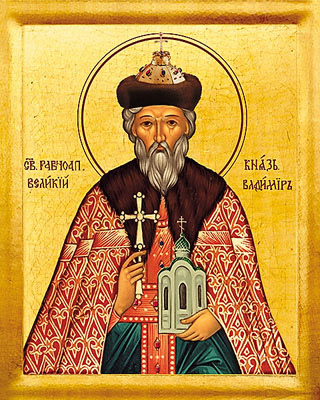 Concurrently, Emperor Basil II in Constantinople approached Vladimir for aid suppressing a revolt of some of his generals. In response, Vladimir sent troops to help Basil put down the revolt. As part of their earlier agreement, Vladimir was baptized with the Christian name Basil, and followed his baptism by a marriage to Basil II’s sister, Anna Porphyrogenita in the town of Chersonesos in Crimea.

Having accepted Christianity, Vladimir then called the people of Kiev to Baptism in the Dnieper River - the iconic event of the Baptism of Rus'. First, Vladimir’s twelve sons and many boyars were baptized. Then, the next day all the residents of Kiev were called to the river, where the Orthodox priests completed the sacrament of baptism. In the following days the ceremony was observed throughout the realm of Vladimir, Grand Prince of Kiev and Novgorod.

By the act of Baptizing his subjects, Vladimir signaled the acceptance of Orthodox Christianity as his state religion. Also, it was this event that Russia, the lands of the Rus and the Slavic east, entered into the greater Christian world as part of the Hellenic Christian heritage. For the Byzantines, the Baptism of the Russians signified their integration into the Byzantine Roman empire itself."