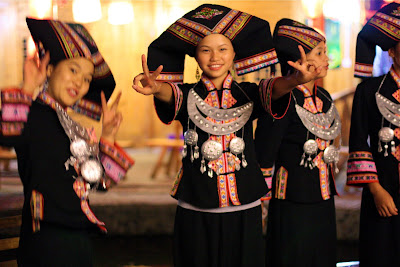 1 • INTRODUCTION
The Miao have a very long history. Their legends claim that they lived along the Yellow River and Yangtze River valleys as early as 5,000 years ago. Later they migrated to the forests and mountains of southwest China. There they mostly lived in Guizhou Province. Military attacks in the eighteenth and nineteenth centuries forced them into the nearby provinces of Guangxi, Hunan, Hubei, and Yunnan. Some Miao even migrated across the Chinese border into Vietnam, Laos, Kampuchea, Thailand, and Burma (Myanmar).

From their earliest days, the Miao practiced primitive farming using slash-and-burn methods. Families never lived in the same house more than five years. As the soil in one area became depleted, they would move away. The Miao became known for always being on the move. However, most of the Miao have settled down since the middle of the twentieth century.

2 • LOCATION
The Miao live in over 700 cities and counties in the seven provinces of south China. They number over seven million, based on the 1990 census. They are widely scattered and live in very small settlements. The Wuling and Miaoling mountain range in Guangxi Autonomous Region is home to nearly one-third of China's Miao people. An old Miao saying goes: "Birds nest in trees, fish swim in rivers, Miao live in mountains."

3 • LANGUAGE
Miao is a Sino-Tibetan language of the Miao-Yao family. It is similar to the Thai language, and it has three dialects. Today, it is written using the Chinese pinyin system, which is based on the Western alphabet. Language is an important way to recognize the many different Miao groups.

4 • FOLKLORE
Miao myths describe the creation of the world, the birth of the Miao people, and their battles and migrations. One Miao creation myth is the ancient "Maple Song": White Maple was an immortal tree that gave birth to Butterfly Mama. She married a water bubble and then laid twelve eggs. The treetop changed into a big bird that hatched the eggs over a period of twelve years. When the eggs hatched, they gave birth to a thunder god, a dragon, a buffalo, a tiger, an elephant, a snake, a centipede, a boy called Jiangyang, and his sister. So Butterfly Mama was the mother of God, animals, and human beings.

5 • RELIGION
The Miao believe that a supernatural power in everything around them decides their fate. They also believe that everything that moves or grows has its own spirit. They worship the sun, moon, lightning, thunder, fire, rivers, caverns, large trees, huge stones, and some animals. They also believe the spirits of the dead become ghosts that may haunt their families and animals, make them sick, or even kill them. Shamans (healers) allow people to communicate with ghosts. The Miao also worship their ancestors. Since the nineteenth century, many Miao have become Roman Catholics and Protestants.

6 • MAJOR HOLIDAYS
There are dozens of Miao festivals. Among the most important are those honoring ancestors. Other holidays celebrate the end of the busy farming and hunting season. Chiguzhang is a ritual held every thirteen years. A buffalo is killed and offered as a sacrifice in honor of the Miao ancestors. The Miao New Year is a joyful holiday. The Spring Festival occurs between January 21 and February 20 on the Western calendar. It is now a major holiday for all of China's nationalities. There are songs, dances, horse races, and music.

7 • RITES OF PASSAGE
To the Miao, a sturdy stone stands for a strong child. When a child is three years old, parents will take gifts to a huge stone. Bowing down, they will burn joss sticks (incense) and pray for blessings and protection. This rite is repeated three times a year. If the child is not healthy, the parents go to a large tree or cavern instead.

Miao boys and girls may date from the age of thirteen or fourteen. In some districts, girls may begin dating at twelve.

The Miao bury their dead underground. A shaman (healer) sings mournful songs. He leads the soul of the dead person back to the family, blesses the children, and tells the dead person how to join his or her ancestors.

8 • RELATIONSHIPS
The Miao are a very generous people. They always keep their house open for guests and greet them with wine and song. Guests are greeted outdoors. Then they are invited to drink, eat, and sing.

The Miao have a group dating custom called youfang (yaomalang), tianyue, zuoyue, or caiyueliang. Boys and girls meet and fall in love by singing and dancing. Group dating is held on many occasions, such as the Sisters' Feast Festival in February or March. For about three days, the girls of a village are courted by young men. The parents prepare meals that their daughters offer to the boys. Each girl offers food to the boy of her choice, who sings for his meal.

9 • LIVING CONDITIONS
The Miao live in houses one or two stories high. The back of the house is built on the mountain slope and the front rests on stilts. The roof is made of straw. Grain is stored in the ceiling. The first floor of the house is for the livestock and poultry. There are three to five rooms in the living quarters. Sons and daughters live separately and infants live with their parents. Furniture includes a bed, cupboard, table, and stool, all made of wood. There are big bamboo baskets for storing food and clay pots for water and wine. The living conditions of the Miao in urban areas are like those of their neighbors of other ethnic groups.

10 • FAMILY LIFE
The Miao are monogamous (they marry one person). The family consists of parents and their children. Property is passed down to men, but women have the most power in the family. Young people may choose who they will marry by dating and falling in love. For the first three years of marriage, the bride goes back to live with her own family. She lives with her husband only during holidays and at certain other times. If she gets pregnant, she moves to her husband's house sooner. The Miao, like China's other national minorities, are not governed by China's policy of one child per family.

11 • CLOTHING
The many Miao branches have their own costumes. These costumes and their hair-styles are the best way to tell one branch of Miao from another. Brilliant embroidery and silver ornaments are distinctive national features, as is the accordion-pleated women's skirt.

12 • FOOD
The Miao's main food is rice. Other foods are yams, millet, corn, wheat, buckwheat, and sorghum. All of them are cooked in a rice steamer. Sticky rice is eaten on holidays. The Miao like hot pepper, and all their food is spicy. They also like sour flavorings. Their diet is mainly vegetables. However, they also eat poultry, eggs, beef, veal, pork, frogs, fish, snails, eels, snakes, crabs, and shrimp. Wine is made at home with rice.

13 • EDUCATION
All children can have a formal education. Some parents, however, do not believe in educating girls. Many girls drop out of school when they are teenagers. As many as 95 percent of Miao women cannot read or write.

14 • CULTURAL HERITAGE
Song and dance are an important part of Miao life. There are many special songs, including love songs, funeral songs, and wedding songs. The Miao also sing as part of the group dating custom.

The dances of the Miao culture express both grief and joy. Sometimes the dancer also blows on a reed pipe.

15 • EMPLOYMENT
The Miao are subsistence farmers (they grow food only to feed their families). Rice is their main crop. They also grow corn, yams, millet, sorghum, beans, wheat, buckwheat, fruit, cotton, tobacco, peanuts, sun-flowers, and other crops. They grow a large number of hot peppers.

In the past, weeding was thought to be a woman's job and plowing was left to men. Today, women plow and do other farm work.

16 • SPORTS
The Miao like horse races, which are often held on holidays. Teenagers love basketball, table tennis, and Chinese chess. The dragon boat regatta is a traditional 1.2-mile (2-kilo-meter) race. The members of a team usually come from the same village. Other popular sports are kicking the shuttlecock and Chinese shadowboxing (wushu).

19 • SOCIAL PROBLEMS
The Miao face the problems of poverty and isolation. Many Miao young people migrate from their villages to cities and coastal areas. When they return, they can bring new knowledge and skills back to their home-towns. However, their absence removes talents and skills needed in the present.

Email ThisBlogThis!Share to TwitterShare to FacebookShare to Pinterest
Labels: 2011, China, Chinese, The World