The Gospel of Pascha: Introduction to the Gospel according to St. John by Abp Dmitri 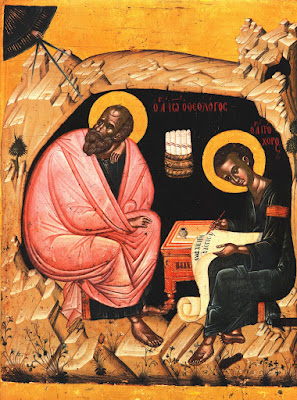 During the forty days between the celebration of the resurrection of Christ and that of His ascension into Heaven the Gospel readings for the Divine Liturgy are taken almost exclusively from the fourth Gospel, that is, of St. John the Theologian. This story of Jesus Christ, His life and His works, is presented in a manner that differs considerably from the presentations of the first three, called the Synoptics: Matthew, Mark and Luke. It was written undoubtedly some years later than the others, towards the end of the first century, or as some students of the Bible think, in the early part of the second century. In any case, its composition is dated several decades after the founding of the Church by the descent of the Holy Spirit on the day of Pentecost.

It is important to note that the Church had already had a life and experience of some sixty or seventy years when St. John (living and working in Ephesus in Asia Minor) was inspired by the Holy Spirit to compose the Gospel that bears his name. St. John himself was an eyewitness to the events of the Lord's life and personally, or from other eyewitnesses, heard the teachings he records, as were of course, the other evangelists. When he wrote his Gospel he had more years of experience as an apostle and leader of the Church than the other evangelists. The Church was the same Church, with the same divine mission under the inspiration and guidance of the Holy Spirit; it had continued throughout those years to do the work that the Savior had sent it to do. However, both the experience and a number of new circumstances contributed to the form taken by his Gospel.

The differences in presentation have, to be sure, nothing to do with the Church's concept and doctrine of the person and mission of Christ. For St. John, Jesus is the Messiah foretold by the prophets. He records Jesus' own assertion (made to the Samaritan woman at Jacob's well) that He was the promised Messiah (4: 25-26). He emphasizes the fact that Jesus was the divine Word of God of the Old Testament and that he was the only-begotten Son of God (see Chapter 1). He does this perhaps more strikingly than the other evangelists; he alone records, for example, some sayings of Jesus that identify Him with God, sayings for which the Hebrews accused Him of blasphemy, of making Himself equal to God. "Verily, verily, I say unto you, Before Abraham was, I am. Then they took stones to cast at Him..." (8: 58-59). "As soon as He said unto them (the officers, chief priests and Pharisees who came to the garden to arrest Him), I am, they went backward, and fell to the ground" (18: 8). There are other examples of Jesus' use of I am, which the Jews understood as His applying to Himself the divine name.

While the above ideas are not absent from the so-called Synoptic Gospels, the theological emphasis they receive in John is remarkable. It has often been noted that the mature reflection of the Church, under Christ's promised inspiration of the Spirit, made possible this presentation of the same Good News with its careful, detailed record of what Jesus said about Himself.

The strong theological emphasis of the fourth Gospel was the reason for its adoption early in the Church's history as the textbook for those new Christians who had received their baptism at Pascha. During the period that followed the yearly celebration of the resurrection they were taught the significance of all the things that had happened to them, their incorporation into the Body of Christ through baptism and the holy Eucharist. The Gospel of St. John was read daily in the services, for in it we find the figures and signs that refer directly to the very holy mysteries that the new converts had received. We might suppose that the need for such an approach to the events and teachings of the Gospel moved the apostle to add this supplement to the existing accounts.

In the last half of the first century, there was another important development in the life of the Church. It had become completely separated from the synagogue. While the first membership was almost entirely Jewish, the Jews generally consolidated their opposition to Jesus and their rejection of Him as the Messiah. More and more Gentiles (or "Greeks," as non-Jews were usually called) were added to the ranks of the Christians, and even the Jews scattered all over the Roman world were hellenized, that is they spoke Greek and read their scriptures and worshipped in Greek. If they were to hear the Good News, the fulfillment of their expectations of their own religion, it had to be in the language and terminology they best understood. St. John's Gospel answered the demand for a presentation of the Christian message in a universal language.

The Church continues to read the Gospel of St. John following its celebration of the resurrection of Christ. The Paschal season is still the period of instruction for all who in "being baptized into Christ, have put on Christ" (Galatians 3:27). For all Christians must know that no matter how long ago they have received their baptism, it was the most important event in their entire life, because they were baptized into the Lord's death and rose up out of the waters in the likeness of His resurrection (Romans 6:5). The time of the celebration of the resurrection is the time of their celebration of their "putting off the old man" and their rising "to walk in the newness of life," (Rom. 6:4-6) the time when Christ's saving work was personally appropriated by them.

Just as those who are already members of the Church, and who during the Great Fast identify themselves with and accompany the learners or catechumens on their journey toward Pascha and their baptism, so also they must in the Paschal season, meditate upon and rejoice in their own incorporation into the Body of Christ. In this way, the hearing of the Gospel of St. John during these glorious forty days has a profound significance for their life in Christ.