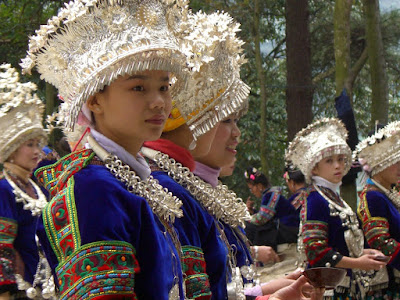 The Miao (Chinese: 苗; pinyin: Miáo; Vietnamese: Mèo or H'Mông; Thai: แม้ว (Maew) or ม้ง (Mong); Burmese: mun lu-myo) are a linguistically and culturally related group of people recognized by the government of the People's Republic of China as one of the 55 official minority groups. Miao is a Chinese term and does not reflect the self-designations of the component sub-groups, which include (with some variant spellings) Hmong, Hmu, A Hmao, and Kho (Qho) Xiong. The Miao live primarily in southern China, in the provinces of Guizhou, Hunan, Yunnan, Sichuan, Guangxi, Hainan, Guangdong, and Hubei. Some members of the Miao sub-groups, most notably Hmong people, have migrated out of China into Southeast Asia (northern Vietnam, Laos, Myanmar (Burma) and Thailand). Following the communist takeover of Laos in 1975, a large group of Hmong refugees resettled in several Western nations (United States, France, Australia, and elsewhere.)

The term "Miao" gained official status in 1949 as a minzu (nationality) encompassing a group of linguistically related ethnic minorities in southwest China. This was part of a larger effort to identify and classify minority groups to clarify their role in national government, including: establishing areas of autonomous government and allocating the seats for representatives in provincial and national government.

Though the Miao themselves use various self-designations, the Chinese traditionally classified them according to the most characteristic colour of the women's clothes. The list below contains the self-designations, the colour designations and the main regions inhabited by the four major groups of Miao in China:
In China, the first recorded Miao kingdom was called Jiuli, and its ruler or rulers, had the title Chiyou (in Chinese) or Txiv Yawg (in White Hmong) or Txiv Yawg (in Mong Leng). Chiyou means grandfather, and is a title equal to, but no less than, emperor. Chiyou's ancestors are thought to be the Liangzhu people. Jiuli was said to have jurisdiction over nine tribes and 81 clans.

According to Chinese legend, the Miao who descended from the Jiuli tribe led by Chiyou (Chinese: 蚩尤 pinyin: Chīyoú) were defeated at the Battle of Zhuolu (Chinese: 涿鹿 pinyin: Zhuōlù, a defunct prefecture on the border of present provinces of Hebei and Liaoning) by the military coalition of Huang Di (Chinese: 黃帝 pinyin: Huángdì) and Yan Di, leaders of the Huaxia (Chinese: 華夏 pinyin: Huáxià) tribe as the two tribes struggled for supremacy of the Yellow River valley. According to legend, the battle, said to have taken place in the 26th century BC, was fought under heavy fog. The Huaxia, who possessed a form of mechanical compass, was able to defeat the tribe of Chiyou.

After general population movement toward south, southwest, and southeast (due in part to influx of northern and western groups such as Huaxia and Donghu), the tribe of Chiyou split into two smaller splinter tribes, the Miao and the Li (Chinese: 黎; pinyin: lí). The Miao continuously moving southwest and Li southeast as the Huaxia race, later known as Han Chinese, expanded southward. Some members of the Miao and Li tribes were assimilated into the Han Chinese during the Zhou Dynasty. (Recent DNA studies suggest that the movement of ethnic groups such as Miao in ancient East Asia is far more complex than this account.)

Another version of the story says that the tribe split three ways. It is said Chiyou had 3 sons, and after the fall of Jiuli, his eldest son led some people south, his middle son led some people north, and his youngest son remained in Zhuolu and assimilated into the Huaxia culture. Those who were led to the south established the San-Miao nation. Perhaps due to this splitting into multiple groups, many Far Eastern people regard Chiyou as their ancestors, and by the same token, many question the ethnicity of Chiyou as exclusively Mong or otherwise. In some circles of thought, the Koreans also regard Chiyou as an ethnic ancestor. Furthermore, under the present ethnic unification policy of the PRC, Chiyou is now also regarded as one of China's forefathers alongside the ethnic Han ancestors, Huangdi and Yandi.

According to the Miao burial ritual 'Show the Way', Miao history can be traced to as early as the Shang Dynasty (1600–1046 BC). After the fall of Shang to Zhou, then came the Chu. When Chu fell to Qin, the great migration began. Many remained and started the great revolt that helped found the Han Dynasty under Liu Bang. Miao culture greatly influenced the Western Han.

According to André-Georges Haudricourt and David Strecker, the Miao were among the first people to settle in present day China. They found that the Chinese borrowed a lot of words from the Miao in regard to rice farming. This indicated that the Miao were the first rice farmers in China. In addition, geneticists have connected the Miao to the Daxi Culture in the middle Yangtze River region. The Daxi Culture has been credited with being the first cultivators of rice in the Far East.

The study goes on to mentioned that the Miao (especially the Miao-Hunan) have some DNA from the Northeast people of China, but has origins in southern china.

Miao scholars also proposed that an intact female corpse found in 1972 in Changsa, Hunan could be a Miao woman, based on the drawings on the casket which are characteristic of Miao design, and except for a few minor illustrations on the top left, Miao scholars assert the rest of the intricate illustrations resembles Miao legends and folk stories.


In 2002, the Chu language has been identified as perhaps having influence from Tai-Kam and Miao-Yao languages by researchers at University of Massachusetts Amherst. If this is true, then the forced sinicization of the Miao may need to be reexamined. Liu Bang, the founder of the Han Dynasty, is a general under Xiang Yu, Chu/Miao King of Western Chu, meaning he commanded Miao troops and they are his base of power. When the dispute with Xiang Yu broke out Xiang Yu's uncle Xiang Bo and Fan Kuai saved Liu Bang's life. This meant Liu Bang's support among the Miao was strong. The Han-Chu contention was not about a struggle between two groups of people but between two individuals.
When Qin conquered Chu he became emperor but the people of Chu did not see the new king as one of their own. Qin's harsh legalistic system caused many Miao to flee into the higher elevation. When Qin Shi Huangdi died, the people of Chu led by Xiang Liang rose up and revolted, restoring Chu for a time. After Qin was conquered, Xiang Liang's nephew Xiang Yu succeeded Xiang Liang but his inability to govern led to the Chu-Han contention. When Liu Bang defeated Xiang Yu, he became emperor and the Han Dynasty was born.
From this period forward, 'Miao' in recorded Chinese records refers only to the Miao who fled. The term "Miao" was first used by the Han Chinese in pre-Qin times, i.e. before 221 BC, for designating non-Han Chinese groups in the south. It was often used in combination: "nanmiao", "miaomin", "youmiao" and "sanmiao" (三苗; pinyin: Sānmiáo)
During the Ming and Qing dynasties (1368–1911) 'miao' and 'man' were both used, the second possibly to designate the Yao (傜 Yáo) people. The Yuan, Ming, and Qing Dynasties could neither fully assimilate nor control the aboriginal people.
During the Miao Rebellions (Ming Dynasty), when Miao tribes rebelled, Ming troops, including Han chinese, Hui people, and Uyghurs crushed the rebels, killing thousands of them. Mass castrations of Miao boys also took place.


In the Qing Dynasty all people of China suffered greatly especially the Miao. During the Qing Dynasty the Miao fought three wars against the empire. In 1735 in the southeastern province of Guizhou, the Miao rose up against the government's forced assimilation. Eight counties involving 1,224 villages fought until 1738 when the revolt ended. According to Xiangtan University Professor Wu half the Miao population were affected by the war.

The second war (1795–1806) involved the provinces of Guizhou and Hunan. Shi Sanbao and Shi Liudeng led this second revolt. Again, it ended in failure, but it took 11 years to quell the uprising.
The greatest of the three wars occurred from 1854 to 1873. Xiu-mei Zhang led this revolt in Guizhou until his capture and death in Changsha, Hunan. This revolt affected over one million people and all the neighbouring provinces. By the time the war ended Professor Wu said only 30 percent of the Miao were left. The defeat began the Hmong diaspora.
During Qing times, more military garrisons were estalished in southwest China. Han Chinese soldiers moved into the Taijiang region of Guizhou, married Miao women, and the children were brough up as Miao. In spite of rebellion against the Han, Hmong leaders made allies with Chinese merchants.
Politically and militarily, the Miao continued to be a stone in the shoe of the Chinese empire. The imperial government had to rely on political means to ensnare Hmong people, they created multiple competing positions of substantial prestige for Miao people to participate and assimilate into the Qing government system. During the Ming and Qing times, the official position of Kaitong was created in Indochina. The Miao would employ the use of the Kiatong government structure until the 1900s when they entered into French colonial politics in Indochina.
During the founding of the People's Republic of China (PRC), the Miao played an important role in its birth when they helped Mao Zedong to escape the Kuomintang in the Long March with supplies and guides through their territory.
In Vietnam, a powerful Hmong named Vuong Chinh Duc dubbed the king of the Hmong aided Ho Chi Minh's nationalist move against the French, and thus secured the Hmong's position in Vietnam. During the Vietnam War, Miao fought on both sides, the Hmong for the US-North-Vietnam coalition, the Chinese-Miao for the Communists. However after the war the Vietnamese took no aggression against the Hmong given the Hmong in Laos suffered years of reprisals.

Email ThisBlogThis!Share to TwitterShare to FacebookShare to Pinterest
Labels: 2011, China, Chinese, The World