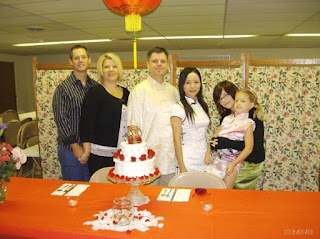 What a year 2009 was! I was forced to switch from Mac OS X to Windows XP with the death of my last Mac, which also switched my Linux distro from FixStars' Yellow Dog Linux to Ubuntu (except on the Sony PlayStation 3). I finally got my wife home after a year of  immigration red tape, I lost another beloved grandparent, I changed jobs, got laid off, moved to a state I never thought I would return to, and learned a lot. And that last part is important. If you stop learning, you are dead. Never stop learning. I have likely learned more about myself this year than any other year of my life. No, it was not some spiritual introspection, or anything like that, but my wife teaching me about myself. She obviously knows me better than I know myself, and she assures me this is "a normal phenomenon". Her knowing me so well has helped me to overcome many of my failings, and she is helping me to become a much better man, every day!

This last year my brother's family and my family have started a new tradition. Every weekend we have dinner together. Usually at his home, although we bring dishes, and sometimes a movie to watch.This last year has also seen my daughter go from a "D+" average student to an "A-" average student. Likewise, my wife has decided to become a Christian. I never forced any beliefs on her, but being in a community with many Chinese Christians, they could better explain the Faith, which has made her into a strong believer. Her strong zeal has helped my zeal to return as well. These 3 changes above are all because of my move back to Texas. An unanticipated move that I see happened for a reason. His Will be done!

Next year will come with many ore changes as well, I am sure. My daughter will become a senior in high school. My wife will be Baptized, we will likely have a new baby on the way, and I hopefully will find a new, good job. I ask your continued prayers, my friends, and may us all have a successful, prosperous, enlightening 2010, and come 14 February, a blessed Chinese Lunar Calendar's Year of the Tiger! As my daughter would say, "RAWR!"