A little about a show coming to my area, and may be coming to a city near you as well:

A Shen Yun show is art you can feel good about. Themes of kindness, compassion, and courage are brought out through the songs of eminent vocalists and stunning choreography. The human spirit triumphs over adversity in powerful, thought-provoking dances. It's a truly uplifting and inspiring experience.

Shen Yun Performing Arts (formerly known as Divine Performing Arts) is a triumph of collaboration, bringing together leading dancers, choreographers, and musicians from around the world. Its productions are unique in being not only tremendously fun and entertaining, but also educational, enriching, and uplifting.

The company’s rich repertory breaks new ground by focusing on the authentic cultural heritage of classical China while also giving artistic treatment to the world around us. Each year, Shen Yun premieres an entirely new program of dances, songs, and musical scores.

Based in New York, Shen Yun Performing Arts is a nonprofit organization that is independent of China’s communist regime and which seeks to revive the true, five-millennia-old artistic tradition of China that thrived before decades of suppression by the Chinese communist state. The company seeks to breathe new life into traditional Chinese culture while providing audiences everywhere with an experience of sublime beauty.

Shen Yun Performing Arts came into being in 2006 with a vision of cultural renewal. It was then that leading Chinese artists and several small performance companies joined together to revive an artistic tradition. For its first two-plus years the company was known as Divine Performing Arts.

The response to Shen Yun’s productions has been phenomenal. Laughter, tears, and standing ovations are a common sight. In its inaugural 2006-2007 season the company performed for some 200,000 people. In 2007-2008, the number swelled to 600,000 and has continued to expand since.

Once the producer of shows titled variously Chinese Spectacular, Holiday Wonders, and Shen Yun, the company now often performs under simply its own name. Each year Shen Yun Performing Arts travels the world, performing on tour across Europe, North and South America, Oceania, and Asia.

Classical Chinese dance (or “Chinese dance”) is an altogether unique dance heritage. In its early stages it was mainly passed down among the common people, through members of the imperial court, and as part of ancient theater.

Over the years, dancers reorganized, refined, experimented with, and reworked it to arrive at the extraordinary system of classical Chinese dance known today. It is part of the divinely inspired heritage that is China’s five-millennia-old culture, and one means by which that culture lives on, having been built upon China’s deep-running, traditional aesthetic tradition.

Classical Chinese dance has as its foundation China’s divinely inspired culture of five thousand years. The unique art of Chinese dance that we know today, with its impressive scale and system, is the product of generations of dancers’ many years of artistic experience combined with their refining, reorganizing, and reworking of the art form.

Classical Chinese dance has its own complete set of training methods in foundational skills, a strict regimen for perfecting bearing and form, and means of training for skill sets such as jumps, turns, and flips, as well as extremely demanding aerial techniques, culminating in an enormous dance system. The aerial movements of classical Chinese dance contain a wealth of high-flying dives, dexterous leaps, and diverse spins.

It is the deeper resonances of traditional Chinese culture, however, that imbue a dancer’s movements with such rich expressive power. The dancer is thus capable of not only portraying a given figure’s disposition or mood, but even the vivid expressions unique to a certain age, whatever the land or time. 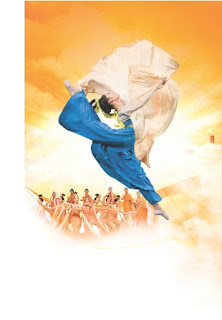 Here’s your chance to discover the dance and music that have won the hearts of millions. Shen Yun Performing Arts presents an exhilarating celebration of China’s traditional arts featuring world-class performers, stunning costumes and backdrops, powerful drum rhythms, and a full orchestra at most shows.

Experience a lost heritage in this remarkable production inspired by the legends and values of centuries of Chinese culture before communist rule. Discover firsthand why Shen Yun’s performances—critically acclaimed as “breathtaking,” “brilliant,” and “glorious”—have delighted audiences of all ages and backgrounds.

It's a stunningly expressive art form that is millennia-old, with a vocabulary of movement so rich as to range from elegant to explosive to everything in between. Meet Chinese dance.

Perhaps no other art form in the world can boast such strong expressive qualities and diversity of technique as classical Chinese dance. Shen Yun Performing Arts’ choreography ranges from grand imperial processions to legions of thunderous drums, with gorgeously costumed dancers moving in stunning synchronized patterns.

The visual effect is a tableau of purity, goodness, and beauty. At once rich in variation and immensely difficult, this dance form’s athletic movements and graceful technique have won high acclaim, with its aerial skills, in particular, often leaving audiences in awe. Shen Yun is notably the only company to have strictly authentic classical Chinese dance as part of its repertoire.

Imagine gracefully twirling about with tea cups perched delicately atop your head, or fistfuls of chopsticks beaten rhythmically about your body, and you can begin to picture the character, color, and vivacity of Shen Yun’s ethnic and folk dance.

The many distinctive ethnic groups within China and around her borders provide a wonderful array of material from which to choreograph and compose. These dances might whisk you away to the plains of Tibet, the shores of a Dai village, or the sprawling plains of Mongolia.

One of Shen Yun Performing Arts’ trademarks, these dances give dramatic portrayal to the cherished stories of yesterday and today. Their figures embody the most exalted virtues of Chinese civilization, and convey a message or moral that is still relevant today. Many have inspired people for generations, such as the tales of heroine Mulan and general Yue Fei. Others quietly lead lives of great courage today that are sure to move and inspire.

From the opening gong, reminiscent of a vast bell, that heralds the start of each show to the soulful erhu solos and hypnotic bamboo flutes throughout, audiences are in for a melodious treat at each Shen Yun Performing Arts production.

The Shen Yun Performing Arts Orchestra brings together two of the world’s greatest classical music traditions, Chinese and Western, in a masterful fusion. With Western instruments as its base, the orchestra brings out Chinese musical flair through a variety of Chinese instruments.

All of the music the 40-plus member orchestra plays is original and composed to fit perfectly with each dance. The live accompaniment adds an energy and joyful exuberance like nothing you’ve experienced before.

Performances by leading solo musicians are an integral part of the Shen Yun experience. Audiences are often surprised by the expressiveness and powerful emotion conveyed by the two-stringed Chinese erhu, with its otherworldly quality that stirs the soul as few instruments can.

Sopranos and tenors with piano accompaniment sing impassioned arias that give voice to the deepest of spiritual longings as well as to hopes that have shaped Chinese culture for centuries.

They invite you to discover for yourself the sounds that critics are calling “flawless,” “fantastic,” and “absolutely perfect.”

The breathtaking digital backdrops at each Shen Yun Performing Arts show bring classical Chinese dance into the 21st century, giving each scene an added visual depth and grandeur. Each backdrop is custom-designed to match exactly a given dance’s costumes, story line, lighting, and even choreography.

Some of the backdrops begin as a painting, some are created digitally. Many are animated, allowing flower petals to sweep gently across fields and snow to softly fall. Come show time, each is manually operated to integrate precisely with the rhythms of the performance.

From radiant golden-hued Tang dynasty gowns to elegant Manchu court chopine shoes, each costume is carefully designed and tailored with meticulous care. Apparel has always been an essential part of China’s five-millennia-old, divinely-bestowed culture, and Shen Yun Performing Arts brings this heritage to life on stage.

The costumes begin with a combination of historical example and new inspiration, and extend to a months-long hunt across countries and continents for just the right materials. The result on stage is a visual feast in which brave warriors do battle in vibrant uniforms and beautiful silken dresses swirl and flow like water.

“There’s just something about them,” audience members often say.

Indeed, more than just being accomplished artists, members of Shen Yun Performing Arts bring an unusual depth to their work. They take to heart an ancient Chinese belief: that to create true art, there must first be inner beauty.

Many draw personal inspiration from traditional Chinese culture and practices, such as the self-cultivation method of Falun Dafa, and naturally bring a calm expressiveness and depth to their work.

Counted among the company’s artists are winners of top international competitions in dance and music along with exceptionally accomplished choreographers and composers. No other Chinese performing arts company boasts such a remarkable body of talent.