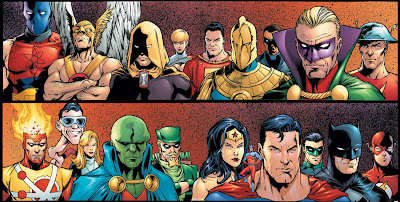 Much is said about the Big-7 concept of the JLA, where the biggest 8 heroes of the DCU (Superman, Batman, Wonder Woman, Flash, Green Lantern, Aquaman, Green Arrow, and Martian Manhunter) come together to form the ultimate team. I enjoy the concept, but I also loved Extreme Justice and the JLI (Justice League International) which had a few big-hitters and a number of 2nd and 3rd string heroes that made a great team.


But my dream team of the Justice League of America (Late 30's to Early 40's super-heroes) in the DC Universe is a little different. I would have them written by Peter David drawn by Ed McGuiness.

As great as the JLA is, the penultimate super-hero team is the JSA: The Justice Society of America. My dream team for them would be a team operating in the 1940's. Today, outside a few exceptions like Alan Scott, they should all be retired. This series should be written by John Byrne and drawn by Chris Batista.

Now that I have chosen for the first 2 generations of the DCU, what about the next 2 generations?  First the Titans, starting with the classic five, written by Kieth Giffen and drawn by Tom Grummett. Oddly enough, I choose a majority female team here.:

How about the youngest generation? Young Justice of America could be the name, with the following teens and young 20-somethings, written by Ron Marz and drawn by Todd Nauck.

Email ThisBlogThis!Share to TwitterShare to FacebookShare to Pinterest
Labels: 2010, The World