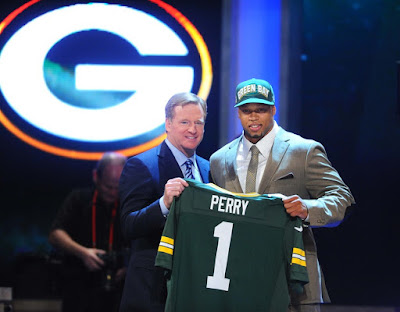 With the 28th overall pick in the first round of the 2012 NFL Draft, the Green Bay Packers have selected USC Trojans defensive end/outside linebacker Nick Perry. Perry played as a 4-3 defensive end in college and stated previously that he would prefer to continue to play the position, but there's no question that he has the athletic ability to play standing up.

The Green Bay Packers are, beyond any shadow of a doubt, going to use Perry as an outside linebacker. Because of the average production that came from the ROLB position in 2011, he will have the opportunity to win a starting job in training camp from Day 1.

The Green Bay Packers have selected Michigan State Spartans defensive tackle/defensive end Jerel Worthy with the 51st overall pick in the 2012 NFL Draft. The Packers originally had the 59th overall pick in the draft and traded with the Philadelphia Eagles to move up eight spots in order to secure Worthy. To get up to No. 51, the Packers had to give up their 4th round pick.

Worthy, like 1st round pick Nick Perry, fills an immediate need along the front seven. The Packers have been in serious need of a 3-4 defensive end since Cullen Jenkins left, and they played a rotation of largely average or ineffective players in 2011. Worthy will have the opportunity to step in and compete for a starting spot immediately.


Ted Thompson traded up for a second pick in the second round on Friday night, giving up the Green Bay Packers'third and fifth round picks for the New England Patriots' second round pick, number 62 overall. With the 62nd pick, Green Bay selected cornerback Casey Hayward from Vanderbilt.

Thompson addressed the defensive problems from 2011 by addressing a different unit from his first two picks. Hayward will likely compete for a spot in the secondary rotation, and should contribute on special teams. Hayward stands 5'11" and weights 185 pounds. He shows good speed and quickness in the secondary and is good in zone coverage -- it's possible that Hayward could be seen as a candidate for a move to free safety.


The Packers were locked into the 132nd and 133rd picks of the draft, their compensatory selections near the end of round four. Ted Thompson continued to focus on the defense, drafting defensive lineman Mike Daniels from Iowa and safety Jeron McMillian from Maine.

The rest of the picks will also be impressive, I am sure, but i will take 2 or 3 years before they are starters, while the above men likely can start in the 2012 season.

Email ThisBlogThis!Share to TwitterShare to FacebookShare to Pinterest
Labels: 2012, Football, The World